In this article I’m going to review the Beautyrest Harmony Lux. I put it through some tests, tell you what it feels like to sleep on this mattress, which sleeping position I think is most comfortable on the mattress, what it’s made of. Then at the end I’ll give you my pros and cons.

To give you a better idea of what it feels like to actually lie down on a Beautyrest Harmony Lux, I want to put it on a firmness scale from 1 to 10, with 10 being the firmest.

I would give this mattress about a 5 and a half out of 10 on the firmness scale. I think it’s actually pretty soft overall. It’s got these really soft foams on top. Even though there is nice support below that, I think you’re going to sink into this bed, you’re going to feel contour around your body a little bit.

In my opinion after testing out the other Beautyrest mattresses, I actually think this is the softest one I’ve tried.

When I’m lying on my back, my weight is evenly distributed and I do feel myself sinking in this position. I do think it’s pretty good for back sleepers. If you like that feeling of sinking into the mattress, if you like a softer mattress and you are a back sleeper, I think you’re gonna be okay here.

Rolling around and changing positions I didn’t feel too stuck or anything like that. The foams have a pretty quick response to pressure and the coil support below did a nice job of allowing me to change positions easily, even though I was sinking further into bed.

When I rolled onto my side, I generally like side sleepers to have a softer mattress because they do tend to have worse pressure point formation, get a jammed up feeling in the shoulders, I feel that pressure at the hips because of all that weight over a smaller surface area.

I do really like the Harmony Lux for side sleepers. I think side sleepers will probably benefit most from this mattress.

However if you go to your stomach, you’re looking for the opposite. Generally stomach sleepers want a firmer mattress so their hips and shoulders are in alignment. I did feel my hips sinking into the mattress because of these softer foams in the pillow top section of the Harmony Lux.

To kind of recap, if you’re a back sleeper that likes a soft mattress, you’re gonna be okay. I think side sleepers will benefit greatly from the Beautyrest Harmony Lux. And I think stomach sleepers will need something firmer.

Instead of just taking my word on the feel of the Beautyrest Harmony Lux, I like to run a few tests on all the mattresses that I review so you get a more objective look at what’s going on with this bed.

The first one up is the pressure map test. Just like it sounds, I put a pressure map down on top of the mattress, lie down in a few positions to see the results ranging from blue for low pressure to red for high pressure.

On my back weight is evenly distributed. I saw it’s low pressure across the board. That’s what I was expecting. I did feel myself sink in even though my weight was distributed on this mattress.

Rolling onto my side, I saw that there was a little bit of light green at the shoulders, but I think that’s in the acceptable range. Generally on a firmer mattress, side sleepers will spike into the yellow or red range at the shoulders and the hips. That’s going to be an issue with too high of pressure.

Next up we have the bounce test and basically I’m checking to see if a mattress provides mobility, if you’re going to sink in the mattress, are you’re going to feel stuck in the layers as you’re rolling around changing positions.

Also the coil support did a nice job of giving it just a little bit of bounce. Not a ton of bounce or anything like that but enough bounce that you’re able to change positions easily.

Next up we have the motion transfer portion of the review. Basically I’m checking to see, if you share your bed with a partner, are you going to feel it on your side of the mattress when they start to roll around, change positions, get into and out of bed during the night or anything like that.

To test that, I put a seismometer down where you might be sleeping and on the other side I dropped a 10-pound steel ball from heights of 4, 8 and 12 inches and tried to see how much disturbance is transferred with each of those drops.

I was actually really impressed with the results of this test for the Harmony Lux. I thought it did a great job of isolating that motion transfer. If you are someone that shares your mattress with a restless sleeper that rolls around throughout the entire night, gets into and out of bed, go to the bathroom and all that kind of stuff, this could definitely help you sleep through the night.

Last but not least we have the edge support portion of the review. Basically are you going to be able to sleep all the way to the end of the bed without worrying about collapsing it. If a mattress has a strong edge, it makes the bed feel bigger. Really good plus for couples.

I was really impressed with the edge support on the Beautyrest Harmony Lux. Pairing the strong edge support with the impressive motion isolation is why I think this is a great mattress for couples. 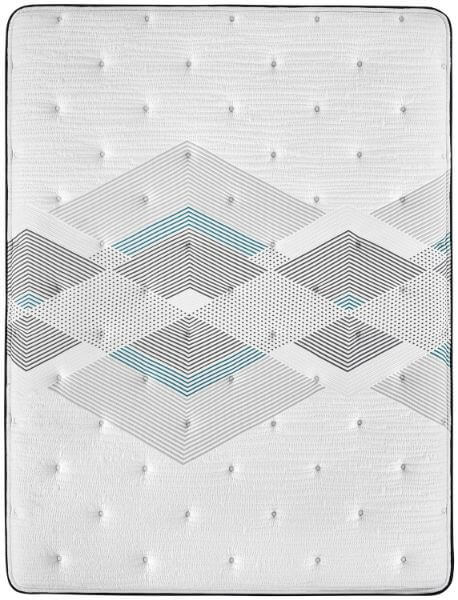 To give you a better idea of where the feel of the Beautyrest Harmony Lux comes from, let’s talk about the materials and the layers of it.

To start with the cover itself, it is their Seaqual material. It’s a sustainable material. They’re very proud of it. It’s got a knit feel to it. I should also mention that the cover is quilted with some really soft foam, so you’re going to sink into that right away, gives you some nice pressure relief right off the bat.

Then we have this pillow top foam section of the mattress. It got the comfort layer, it’s a polyurethane foam, really soft, you’re going to sink right into that. But it has a quick response to pressure, so as you roll around, change positions, it snaps back to its form, so you’re not going to feel stuck in the mattress.

There is a really thin layer of memory foam you’re going to sink into, but you’re not going to feel that too much because of all the polyfoam right above it. That’s above the transition layer, which is another soft layer of polyurethane foam.

It’s all supported by the pocketed coil section of the mattress. These are individually wrapped coils. They’re going to be supportive, pretty bouncy, but they are going to move individually, they’re going to do a better job of isolating motion transfer than traditional steel coils would.

Another thing about the support layer is that it’s surrounded by high density polyurethane foam, it’s a firm material and that’s going to let you sleep all the way to the end of the bed without collapsing it. A really nice feature they’ve included on the Beautyrest Harmony Lux.

While all the Beautyrest models are well-built mattresses that have really solid support systems, they don’t all feel the same. To help you better understand the differences, I want to put the Harmony Lux head to head versus the Beautyrest Black and Beautyrest Hybrid mattresses.

The Beautyrest Black is the firmest of their mattresses with a really strong feel that kept me feeling on top of the bed, not sinking too far in at all. I would say a firm mattress like this is going to be best for back sleepers or stomach sleepers that need to keep their hips and shoulders aligned to avoid lower back pain.

Along with that I also found the Beautyrest Black to be a great cooling mattress, so it could also be a good option if you tend to overheat at night.

I’d also say it’s a nice option for couples because it’s a good for multiple sleep positions and does a good job isolating motion transfer to cut down on disturbance from restless sleepers.

A Simmons Beautyrest is one of the biggest names in the mattress world and because of that I get a lot of questions that aren’t covered by normal reviews. I want to cover a few of them here.

How long do Beautyrest mattresses last?

I gotta say these are well-built mattresses and I think they’re pretty durable. I know they have a 10-year warranty on these mattresses and I would say that I would expect this mattress to last between seven and ten years. It is always a good idea to check the support of the mattress and make sure you don’t have any sagging or anything like that every three to five years. But I would expect it to last longer than that.

Can you flip a Beautyrest mattress?

The answer is no. You don’t want to do that because of how this mattress is built. It has the support coils at the bottom with the comfort foams on top. If you are worried about sagging into the mattress because you sleep in the same position every night, I would recommend rotating the mattress 180 degrees every six months.

The answer is no. In fact I actually tested this mattress on a slatted bed frame. If you do have a box spring that you really like or you just feel more comfortable using one, you can feel free to do so, but you do not need one.

Before I end the review I want to give you some of my pros and cons for the Beautyrest Harmony Lux.

First up, reasons I think it’d be a good choice for you is if you are a side sleeper. Again I think this mattress is a bit on the softer side. You’re gonna be able to sink in and avoid pressure points of the shoulders and the hips. I think it’s a great option for those that are suffering from shoulder pain specifically.

I would also say it’s a good option for couples because of the really nice edge support. Also its ability to isolate motion transfer. Those are the two things I mainly look at as being reasons to recommend the mattress to couples.

Also I’d recommend it for its durability. Soft mattresses aren’t always super durable, but I think this one’s really well built and I think it’ll stand the test of time.

I don’t think it’s the perfect matches for everybody. Some of my complaints about the Beautyrest Harmony Lux are that it’s a little bit too soft for the stomach sleepers out there. I do think that this mattress actually comes in a few different support levels. I tested the medium and I found it to be a little bit on the softer side.

Also I found that this mattress slept a little bit hot, which is a strange because I found that the Beautyrest Black and Beautyrest Hybrid both slept on the cooler side. So if you are looking at this line and you’re worried about overheating during the night, you might want to take a look at those mattresses instead.

That’s it for my review of the Beautyrest Harmony Lux.