In this article we’re taking a look at the best linen sheet sets on the market.

For this roundup I’ve chosen six of my personal favorite linen sheet sets and they are all made from 100% linen.

I chose them all to be 100% linen because, in my experience, I do find that when you blend linen with another material, it can sometimes dilute the natural benefits of pure linen.

That said, each individual sheet set that I picked does have its own set of perks to bring to the table.

But before that, I recommend you to take a look at these silver infused sheets. These antibacterial bed sheets have some really amazing features. For example, they can be washed 3 times less often! 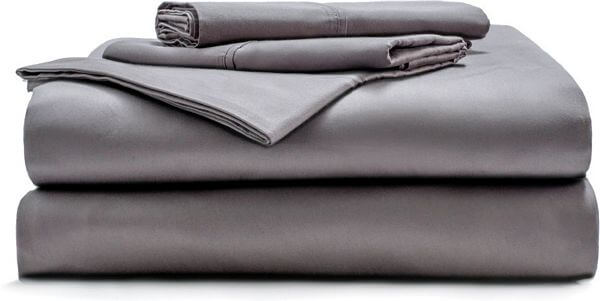 Linen is derived from natural flax fibers, which makes linen a nice eco-friendly option because flax fibers are a sustainably sourced material and Casper sources its flax from Belgium, which is considered by many to offer some of the highest quality flax in the world.

As soon as you feel the Casper linen sheet set, you can definitely feel this luxuriously soft high-quality. But as a hot sleeper, the thing that I really love the most about the Casper sheet set is how super lightweight, airy and breathable it is.

It’s worth noting that linen is thermoregulating, which means it adapts to your body’s temperature, which makes it a great summertime pick, but also a great insulator in the winter.

But in the case of this particular Casper linen sheet set, when I held the fabric up to the light, I could see a lot of light
shining through, which gave me a really good idea that it was going to be exceptionally breathable. After rolling around in it, I’m pleased to report it kept me very cool.

For those of you who shy away from linen because it does have that distinctly coarse texture, you might like to know that each piece of bedding within the Casper linen sheet set has been individually pre-washed to reduce that coarse texture and really boost the soft feel.

For a set, depending on the size you choose, pricing starts at $200.

Next up we have the WoodRose sheet set from MagicLinen.

Just to clarify, the bedding brand is MagicLinen and WoodRose is the name of the color of the set and I have to say it’s a very pretty color. It’s got this really dusty rose look that I love, but it’s also amplified by the fact that it’s stone washed.

Stone washing is a textile manufacturing technique wherein linen fabric is washed with large stones to cut through that rough, scratchy feel and really make for a very soft hand feel, but also boost this casually lived in rustic aesthetic.

These are a little bit heavier in weight as compared to the Casper linen sheet set, which is gonna make them even better for a year-round use.

You might even get a little bit more bang for your buck with the MagicLinen.

That said, it still is super breathable, naturally moisture wicking and just feels really soft on the skin.

The folks from Parachute say this linen sheets set is perfect for sleepers looking for a laid-back casual look with a luxuriously soft feel.

I have to say it’s a very accurate way to describe this sheet set.

Of all the linen sheet sets I’ve ever tested, this one has a very unique aesthetic that almost reminds me of dark denim that’s been through years of washing. And that’s because this particular linen sheets has been garment washed and garment dyed to make for this sort of look that they referred to as laid-back and casual.

Compared to the other linen sheet sets we’re looking at, I do find this one to be the heaviest in weight. While linen is thermoregulating and is great for year-round use, this one might be particularly beneficial when the cold weather rolls in.

Pricing for the sheet set ranges from about $149 to $189, again depending on the size that you choose.

I would say that of all the sheets that we’re looking at here the Brooklinen and the Casper are most similar.

The Brooklinen linen feels very light, extremely breathable and breezy, also very soft to the touch because, similar to Casper, every individual piece of bedding within the set has been individually pre-washed to eliminate a little bit of that coarse texture.

You can get the hard core linen bundle, which includes a full sheet set, so a fitted sheet, top sheet and two pillowcases. But also a duvet cover and two additional pillowcases.

So for folks who are really trying to knock out all of their linen bedding essentials in one purchase, the bundle might be a good way to go.

Another thing I really like about the Brooklinen bundle is that it comes in twelve color options.

Depending on whether you get just a core sheet set or you get a bundle, price does range quite a bit from about $249 to over $400 dollars.

I have to be completely honest with you. If I had to pick of every linen sheet set in this round up my favorite linen sheet set, it would be this one.

It’s because Snowe uses a proprietary technology, wherein the linen fibers are whipped and blasted with air until they’re completely relaxed and it leaves the finished product feeling impeccably silky smooth.

Of every linen sheets that I’ve ever felt in my life this has got to be the smoothest feel.

It does come with all the natural perks of 100% pure linen. It’s super breathable, it’s naturally moisture wicking, it’s eco-friendly.

But if you’re a sleeper who really avoids linen because you don’t like any bit of that coarse texture at all, I would recommend this sheet set.

There are many sleepers for which that gently massaging, the sort of uniquely coarse texture of linen, is the basis of appeal and I would say the Tuft & Needle does a great job of bringing that to the table.

But also because these are garment washed you’re still getting a really soft and smooth feel .

By now you’ve probably noticed that linen sheets aren’t the least expensive bedding on the market and that’s primarily because it typically costs more to make as compared to cotton sheets.

That said, Tuft & Needle is a very budget-friendly option, ranging from about $175 to $225. So if you are looking to boost your linen bedding essentials, but you’re not looking to break the bank, this might be the way to go.