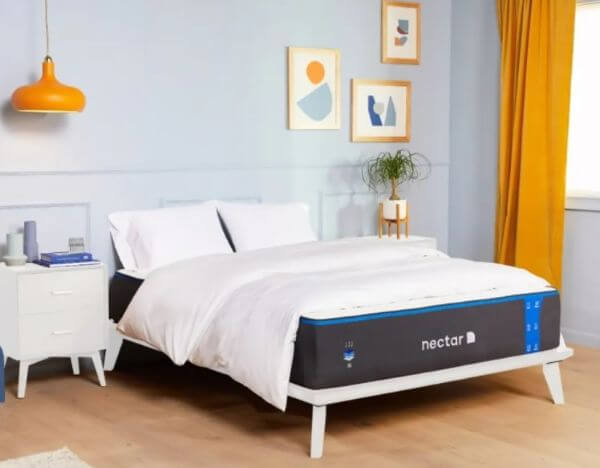 In this article I’ve got a mattress comparison. I’m talking the Nolah Original 10-inch versus Nectar.

I’m going to touch on everything that both of the mattresses have in common. I’ll talk about the differences. I’ll touch on pricing, some things that couples might want to consider and at the end I’ll have a final verdict for you.

I’ve reviewed over 100 beds and counting, so I know a thing or two about mattresses. Hopefully this article has everything that you want to know about either the Nolah original 10-inch or Nectar.

When you order them online, you’re gonna receive the following policies, starting with completely free shipping.

Both these mattresses are bed in a box bed, so they’ll show up to your house in a box. You basically just drag it inside, rip off all the packaging, let the things expand on your foundation or floor, and then that’s your new mattress.

Both the Nolah and Nectar beds are all foam mattresses, which means that they might need a little time to expand and get to their true firmness.

Within that trial period, if you don’t like the beds for whatever reason, you can get completely free returns.

But hopefully you do enjoy the mattresses. If so, Nolah is backed by a lifetime warranty. Nectar has a forever warranty, which I’m pretty sure is the same thing. 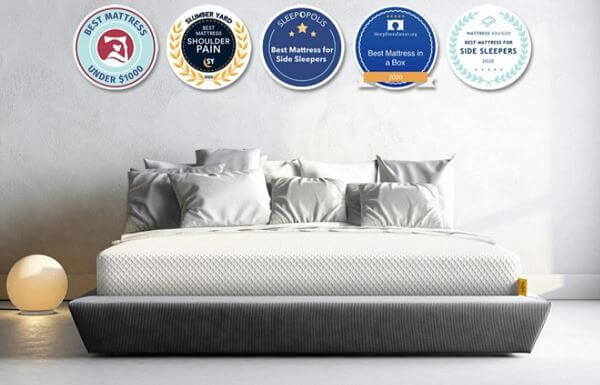 But let’s get into this comparison and touch on construction.

This is one of the main similarities between these beds, because they’re both a three layer all foam mattress.

Nolah has support foam, a transition layer and then the comfort layer, which is called Nolah AirFoam, which is pretty much similar to a memory foam but just way more responsive.

Nectar on the other hand has support foam, a transition layer and then a dense viscous memory foam for comfort. That’s all wrapped up in a machine washable cover.

On Nolah, the cover is removable but it’s not machine washable, so you’ll probably have to spot clean it.

But with Nectar it’s nice to know that you can run that thing through your wash and get a brand new clean bed.

One cool thing about Nolah is that the bed is made in the USA. So if you like American-made products that might move the needle for you.

Since I’ve started discussing the differences, I’ll touch on another one.

Nolah has more of a mixed foam feel. That Nolah Airfoam, combined with that transition layer and support foam, makes the bed feel pretty responsive.

Though it has some of that memory foam quality, it’s definitely going to be way more responsive than something like Nectar, which has a dense viscous memory foam feel.

When you go to lay down on Nectar, the bed will feel pretty firm at first, but you’ll slowly start to sink into the mattress as it conforms to the shape of your body.

The feel of Nectar is pretty similar to that of a Tempur-pedic. When you push down, it’s gonna slowly respond.

But if you are a memory foam fan, and you like that dense viscous feeling, this may be the bed for you.

On the other hand, if you push your hand into Nolah, it’ll respond rather quickly. It does have some of that pressure relieving qualities of a memory foam, but the really responsive nature more of a latex foam.

Since Nolah does have those two different feels in one, I would classify it to have a mixed foam feel.

In terms of firmness, Nectar is going to be the firmer bed. It’s around a medium firm on the firmness scale, meaning it’ll work great for all sleeper types, but probably will be better choice for back and stomach sleepers, since they usually prefer a firmer sleeping surface.

Nolah on the other hand is between a medium soft and a medium. It’s definitely on the softer end of the spectrum. This bed will probably be best for side and combination sleepers.

We also think that all sleepers could get by on it. Since these beds are both three layer all foam beds, they’ll probably be best for medium to petite size individuals.

Let’s touch on a couple more things that couples might want to consider if you want to go the route of Nolah or Nectar.

The first one being edge support.

This is basically how sturdy the edge of the mattress is, if you like to sleep really close to it.

Both of these beds, since they are all foam, will perform fine in this department, nothing to write home about, but it’ll probably work for most people out there.

The other thing that couples might want to consider is motion isolation.

That’s basically if one person rolls around or moves around a lot, are you going to feel it on the other side of the bed. For both of these beds, they deaden motion pretty well. I don’t think that you’ll feel your partner if they get up or roll around a lot.

The last thing that couples might want to consider is temperature regulation. Is your bed going to sleep hot or cold? For both of these, I think it’s basically going to be a temperature neutral sleeping surface.

There are a couple other X factors about both of these mattresses. I touched on the ones that have to do with Nectar. The machine washable cover and that full year sleep trial.

But for Nolah they actually donate some of their proceeds to the Defenders of Wildlife Foundation. So if you want to support a company that helps support endangered species, maybe Nolah will be the bed you decide to go with.

Let’s talk about price. This is definitely a major factor for most people out there shopping for a new mattress.

But both of these brands do offer discounts on a pretty regular basis, so check to see whatever those current deals are.

After discount, Nolah should run you around $900 and Nectar should be around that $800 mark. Nectar also sometimes does bundle in sheets and pillows and some sort of gift.

That’s basically all I have for you in this Nolah vs Nectar comparison.

Hopefully you enjoyed this article and learned something.

But now it’s time for the final verdict. I want to answer the questions that you may have. Who is each bed best for and who should go with which mattress?

I would probably steer you towards Nolah if you’re looking for a bed between a medium and a medium soft firmness, you want something with more of a mixed foam feel and you like that the company donates to the Defenders of Wildlife Foundation as a bonus.

You might want to look into Nectar if you want a bed with a dense viscous memory foam feel, that’s around a medium firm on the firmness scale, you want a bed that has a machine washable cover, and some really consumer-friendly policies.

That was Nolah vs Nectar.