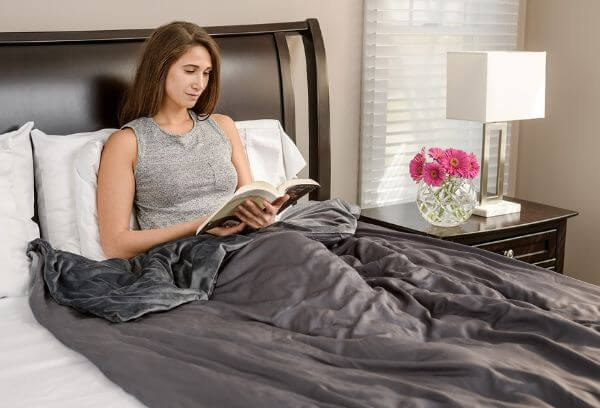 I’m a hot sleeper. I wake up in the middle of the night, I’m sweaty, I’m clammy, and I also like to use a weighted blanket.

Let’s talk about the Luxome. They’ve a couple different types of models. They have some models that are made specifically with cooling features.

There are two ways you can go.

You can go with the one that has the integrated cover, where the bamboo is actually in the weighted blanket itself, or you can go with one with a separate duvet cover.

I personally like using a duvet cover with my weighted blanket. Makes it much easier to clean, so I opted for that version to review.

In terms of weight, you have three weight options. You have 8-pound, 15-pound, and 18 pounds.

When choosing a weighted blanket, people use this formula: take your body weight, divide it by 10, add or subtract one or two pounds to find the right weight for you.

With Luxome, though, they don’t subscribe to this formula.

They say it’s more about finding the right weight concentration, and they’ve done the math for you.

Basically, whether you pick the 8-pound, the 15-pound, or the 18-pound, if you cut out a foot by a foot, a square of each weighted blanket, they’re all going to weigh exact the same.

What really sets the Luxome apart is this bamboo duvet cover. It’s made with 300-thread count, 100 percent bamboo. It’s lyocell bamboo. Lyocell bamboo is going to be much more eco-friendly than other types of bamboo.

It has some very nice cooling properties, too. It’s supposed to help you sleep nice and cool at night.

It also has very flush zippers on the side. It took me a long time to actually get inside the duvet cover and find the weighted blanket. Maybe it’s a very well-designed weighted blanket. I hope it’s the latter.

Once I got inside, there are going to be duvet tabs and duvet ties to actually keep the weighted blanket tied inside the duvet cover. Most weighted blankets have these on the outside.

Looking at the blanket itself, on the outside, it’s going to be 100 percent cotton. It’s going to have gridded stitching. Very, very standard design, pretty wide squares on the Luxome.

Inside, you’re going to have hypoallergenic glass beads, one millimeter, very small, very fine, hard to feel, so not bumpy.

There’s also some extra fill in there, as well, to keep that distributed throughout the entire square.

In terms of washing, you can actually wash it at home, whether it’s the blanket or the duvet cover. They just say, “Do it on a delicate cycle.”

Let’s talk about my experience with the Luxome.

First off, just talking about weight, they do have three weight options, 8 pounds, 15 pounds, and 18 pounds. Again, usually, when I’m trying to find the right weighted blanket for me, I use what other companies prescribe, and that is going to be taking my body weight, divide it by 10, add or subtract one or two pounds.

That being said, I like a heavier weighted blanket, and 18 pounds was just not heavy enough for me. I’m used to something heavier. I want a little bit more deep tissue pressure. While I am getting nice, even pressure, I would like a little bit more weight.

A big issue for me as a hot sleeper is, especially in a weighted blanket, I wake up sweaty and clammy. Did that happen for me with the Luxome? I can say it didn’t.

This duvet cover is really doing its job. The bamboo is smooth to the touch, has this silky feel, also cool to the touch, so lying underneath the Luxome, I was not sleeping hot at all.

Did it help me sleep? I can say the Luxome did help me sleep pretty well. My usual test is, at work, I put the weighted blanket over my body while I’m trying to do a little bit of work and I just test to see if it lulls me into a comfortable state, helps me sleep.

I’m not supposed to be napping at work, so don’t tell anybody. This did help me sleep quite well, so overall a very successful experience with this weighted blanket. 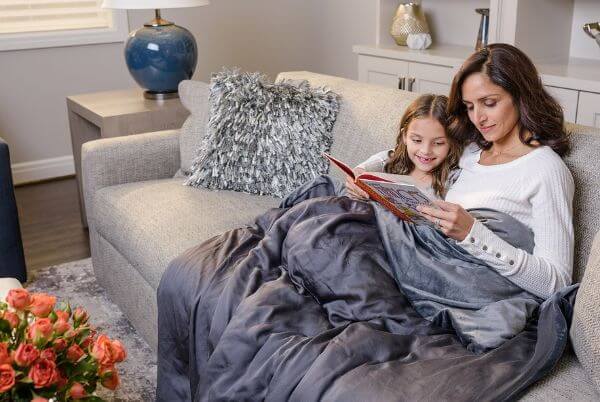 Let’s talk about the pros, who I think the Luxome might be a good fit for.

First off, if you’re a hot sleeper, but you want to sleep under a weighted blanket, I would definitely take a look at the Luxome. It has this bamboo duvet cover, very cool to the touch. Helped me sleep cool at night. It should do the same for you.

What’s very interesting about the design is, it has these very flush zippers – you don’t even know they’re there – and extra ties to keep the weighted blanket secure inside the duvet cover.

Keeping all of that in mind, this is a very high quality weighted blanket. If you wanted something on the luxury end, you want something very nice, with high-quality components, I would take a look at the Luxome.

Now let’s talk about the cons, who I think the Luxome might not be the best fit for.

First off, if you’re looking for something more budget-friendly, something more affordable, you might want to look elsewhere. Right now, it’s around $190 for the queen size model of this version. You’re getting a lot for your money, but it might be outside of some people’s price ranges.

Other companies have a lot of weight options, a lot of different size options. If you want more weights to choose from, you want to find the right, exact weight for you, you might want to look elsewhere.

In the end, I was really impressed with the Luxome. It helped me sleep cool at night and also helped me sleep well. I will say that if you’re looking for more weight options, more size options, you might want to look elsewhere.