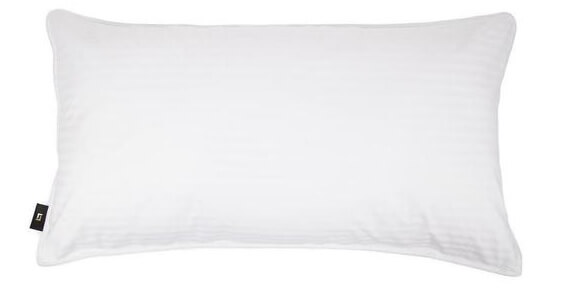 I’m going to show you what they are made of, how they compare and let you know which sleepers are going to be most compatible with which pillow.

I’ve tested a lot of Down-Alternative Pillows and a lot of the time when I press into them, I can tell right away, “Oh, this is definitely not Down.”

I’m impressed to say that that’s not the case with these pillows.

I’m going to say right now, folks who love the feathery fluffy feel of Down but don’t want to sleep in any animal products, you’re probably going to be very compatible with this Down-Alternative Pillow.

Let’s go ahead and look at exactly what each of these pillows are made of.

Both of these pillows are covered in 100 percent stretched cotton, which feels very soft to the touch but also very breathable. I can tell it’s breathable because when I’m pushing into each pillow, I can feel the air flowing through the fabrics, so it’s going to help keep me cool.

The difference, of course, is the fill.

As far as feel goes, they are pretty similar. However, they are a few subtle differences.

First of all, the loft.

The real Down Pillow does have a loftier build, and it’s also more fluffable. Real Down is very easily compressible.If you want to compress it into a lower loft – say because you’re in the stomach-sleeping position for example – you totally can.

When it comes to the Down-Alternative Pillow on the other hand, you are still getting that really fluffy feathery feel.

Also, it’s worth noting that both of these pillows offer a soft medium-level of firmness. With the Down Alternative, you are getting a lower loft. Ultimately, this one is going to be better for stomach sleeping, which we’ll get to in a moment.

Another thing worth noting – in my experience testing these pillows and testing Down-Alternative Pillows in general – is that real Down is a little bit better about maintaining its shape over the course of the night.

Let’s take a closer examination of which positions each pillow is going to be best for and which sleepers are going to be more compatible with which one.

First let’s talk about the real Down Pillow.

I’ve been rolling around in it, and I have to say it’s a great all-position pillow.

First of all, it has a nice lofty build, but it’s also compressible, so side sleepers who do need a loftier profile can enjoy it. It also got a really fluffable feel.

If you like to tuck an arm under or fold a corner, you can totally do that because it’s very foldable and shapeable.

You’ve also got that nice lofty profile of almost five inches to support you and also keep neutral spine alignment.

Back-sleeping, the same thing. I found it to be very comfortable. The Down just comfortably cradles your head and neck and most importantly keeps everything in neutral alignment.

I’m also loving it for stomach-sleeping because its got a very compressible loft. Again, it’s really easy to just embrace the underside of your pillow.

Sometimes stomach sleepers don’t like to sleep with their arms directly at their sides. If you do like to scoop your arms underneath the pillow, you can totally do this. It’s not going to prop you up too much because the Down is very easily compressed.

When it comes to the down alternative, I’m only finding it to be suitable for back and stomach sleepers. The truth is side sleepers do need a loftier profile.

Because this one already has a lower loft, but also because Down Alternative doesn’t maintain its shape as well as the real Down, it’s just not lofty enough for side sleeping.

When I was on my stomach, I found it to be the most compatible with that position because it’s got a nice low profile, it doesn’t crane your head or your neck upward at all.

Also, it’s great for back-sleeping too because, like I said, it does feel a lot like Down. You’re still getting that really comfortable cradle of your head and neck and it feels fluffy like feathers.

There’s a lot that I’m liking about both of these pillows, but just a few things that really stood out to me.

Number one, I have to say I’ve been testing a lot of pillows.

I had a hard time telling the difference between the Down and the Down Alternative. I have to say of all the Down-Alternative Pillows I’ve ever tested – of which there have been many – this one has got to feel the most identical to Down, so props to Luxe Pillow.

Another thing I was really liking is, as a hot sleeper, I was worried that the Down – which often does serve as a great insulator – was going to trap my heat and warm me up, and I didn’t find that to be the case.

The cotton cover fabric was really breathable, allowed for great airflow within the pillow. Amidst all my rolling around, I didn’t find either of them to trap my heat too much or warm me up.

Another thing I’m liking is that both pillows blend themselves well to more than just one sleeping position.

With the Down Alternative, you’re still getting a great option for both back and stomach sleepers.

A few things that I like about the brand itself is that it donates one percent of all sales to Portland Public Schools.

Also, it offers, with both of these pillows, a generous trial period of 100 nights. For being honest, maybe we don’t need a full 100 nights to decide if a pillow is the right fit for you, but it’s nice to have the time.

If within that 100-night trial period you decide that these pillows are not the right fit for you, just send it on back and you’ll be fully refunded.

A few things to consider before you make up your mind.

First of all, sleepers who are vegan or who are worried about sleeping on animal products, you might want to stick to the Down-Alternative Pillow.

However, it is worth noting that the real Down Pillow does come with what’s called Responsible Down Standard certification.

Basically, that guarantees that the organizations that Luxe Pillow sources its Down from guarantee that the ducks and geese are treated humanely and raised responsibly.

If you want to know more about the certification, Luxe Pillow does detail a lot of information on its website.

Another thing worth noting is that while the real Down Pillow is a great all-position pillow, the Down-Alternative simply isn’t lofty enough for side sleeping.

If you are a side sleeper and you’re interested in the Down Alternative, I would definitely take advantage of the trial period.

While I love that Luxe Pillow does offer a very generous trial period, something to always consider is price.

Real Down is always going to be more expensive than Down Alternative.

The truth is, neither of those are necessarily going to be in everyone’s price range.