Leesa Vs Casper Mattress (Which Bed is Better?)

In this article I’m comparing the Leesa vs Casper mattress.

At the end of this article you’ll know exactly what makes these two beds different from one another. But more importantly, you’ll know which one is best for you.

Though the differences between these two beds have caused quite the debate, I must acknowledge that there are similarities between them as well.

They’re all foam beds, and they both have medium to medium firm firmness levels, so they work well for the average sleeper.

They both come with the industry standard 100 night sleep trial and ten year warranty. So their policies aren’t that different either.

Now let’s talk about what makes these two mattresses different from one another.

Leesa’s base price is slightly cheaper than Casper’s, and they tend to run more deals than Casper does.

But Casper actually has better edge support, which is great for seniors, couples, and it means your bed will have more durability.

Of all the differences I’m going to deep dive into, they all stem from one thing – mattress construction.

So let’s take a look at the Leesa vs. Casper mattress, layer by layer to gauge differences in performance.

First up, the comfort layers.

Casper has Breathable Airscape foam that allows body heat to escape to bed, so it sleeps slightly cooler than your average foam bed.

And Leesa’s top layer is bouncy and slightly breathable. This makes it more responsive than your average foam bed.

Next up, the transition layer.

Casper has a zone support layer that provides firm support in your mid section and softer support at the head and the feet to keep you perfectly aligned, while Leesa’s transition layer is made of pure memory foam that helps with pressure relief.

Let’s move on to the final support layer. 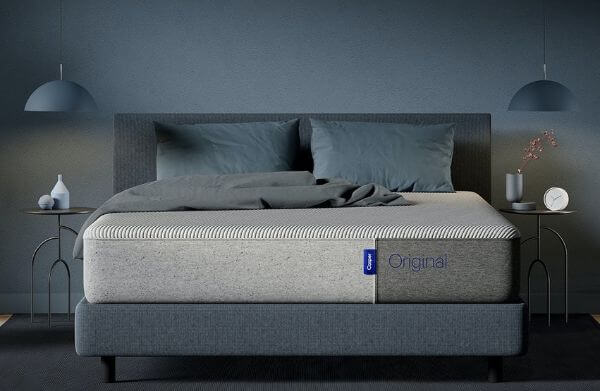 In the mattress industry, we rate firmness on a scale of one to ten, with ten being as firm as the floor.

The Leesa is a 5.5 out of ten on the scale, which is a true medium and the Casper is a six out of ten or medium firm.

And like I said before, both of these beds will work well for the average sleeper.

And when it comes to responsiveness for combination sleepers, Leesa kicks butt. Thanks to that proprietary foam. Casper is pretty responsive, too, but not as much.

If you take nothing else away from this article, know that your primary sleeping position is crucial when shopping for a mattress.

Let’s get going with sleeping positions for side sleepers. Side sleepers want to keep the pressure off their hips and their shoulders and align the spine.

Both mattresses have similar performance for side sleepers. Casper does a great job in alignment, thanks to the zone support layer, and Leesa’s foam keeps your spine where it needs to be.

But both mattresses did see some pressure issues, so that’s something to be aware of if you sleep on your side, and I’ll get more into that a little bit later.

Back sleepers are easy. All you need is to feel comfortable on the surface and have the natural curve of your spine maintained. And both of these beds do that really well. Another tie.

Finally, we got our tie breaker, stomach sleepers. They need a bed that’s firm enough to lift their hips and align the spine. And because the Casper is a little bit firmer, it takes the cake for stomach sleepers.

It’s time for science. I rolled out my super scientific pressure relief map, which uses heat mapping technology to indicate pressure distribution along the body.

Just know that blues and greens are good, and reds, oranges and yellows indicate areas of high pressure.

So let’s take a look at my results, starting with the Leesa.

I can see a pressure build up in the shoulders, no matter what body weight our sleepers are. But when you flip on the back, I see blues and greens all around, looking really good here.

Now, if we go onto the Casper on my side, I can see some pressure concerns on the hips and the shoulders. However, on the back, you’re good to go, you should have no issues sleeping on your back on the Casper.

Motion isolation and edge support are key factors in determining whether or not a bed will work for people who sleep in pairs.

Motion isolation is a bed’s ability to stifle motion at the source and keep it from transferring across the mattress and waking up your partner.

Neither bed does this terribly well.

Edge support is how supportive the perimeter of the bed is. Essentially, if you want to sleep far away from your partner on the edge of the bed, a bed with good edge support will allow you to do that comfortably. And Casper beats the Leesa.

Who Should Get The Leesa Mattress?

Any average Joe. If you don’t have any special needs from a bed or any aches and pains, this is a really good mattress. So if you just want a nice cozy bed, that’s it, Leesa is it.

Who Should Get The Casper Mattress?

First up people who like a bed that will support their entire body across the surface of the bed. Shoutout zone support. It’s really awesome.

Second, back sleepers will love how the bed relieves the pain for them and aligns their spine.

And lastly, lightweight to average weight stomach sleepers will jam really, really good with the Casper.

All right y’all, I’ve reached the end of this article and based on the info that I gave you, it’s up to you to settle the debate.