Here I’m talking about Brooklyn Bedding versus Leesa mattress and which one is right for you.

I know this whole mattress shopping experience can be intimidating, it can be frustrating, but don’t worry I’ve got you covered. I have reviewed numerous different beds and I know the exact differences between these two beds and I’m definitely going to help you out.

The way I’m gonna break down this mattress comparison is I’m going to talk about the policies. If you do buy from Brooklyn or you do buy from Leesa, what do you get. Like shipping, returns, all that stuff. And then I’ll cover how they’re similar and then the big reasons you would get one over the other.

So let’s talk about the policies just really quickly.

Both are gonna come with totally free shipping. They’re gonna ship to your house in a big box. You also get a test window, it’s 120 nights with Brooklyn, it’s a hundred nights with Leesa. It’s three to four months and that should be more than enough time.

I would venture that 90% of people, maybe even 95 percent of people know whether or not they want to keep the mattress in the first 30 days. So 3 months or 4 months doesn’t really matter because you can also get free returns if you don’t like to bed.

Let’s say 68 nights in, you decide it’s just a little too firm for me or a little too soft, you can get totally free returns. They even send some in your house and they pick it up.

As far as warranties go, 10 year warranty. Leesa and Brooklyn Bedding mattresses are both made in the United States. 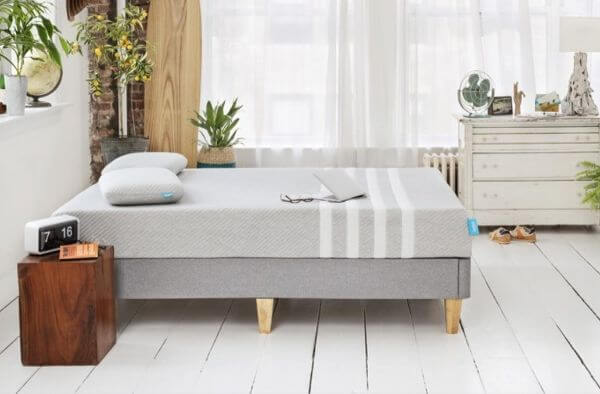 In terms of what else they have in common, there’s a few things. The first is the feel of the mattress, not necessarily its firmness level, but what it feels like in the way of materials. They both have just a neutral soft foam feel. If you close your eyes and you picture a comfy slab of soft foam, that’s really what Brooklyn Bedding Signature feels like and Leesa feels like.

I’ve done all sorts of content on the other beds, but I’m gonna stay focused on the one that most people are looking for.

So a similar overall feel for those two most popular models.

On top of that, they have a fairly similar price points. It’s about $1,100 for a queen-size with Leesa, and with Brooklyn Bedding Signature.

That said, they do offer promotions pretty much year-round. It will depend though a little bit on the sales that they’re offering. But right around $1100 for a queen. That’s pretty affordable.

With a discount, Brooklyn Bedding will come down to right around $850. Leesa will be somewhere between around $950.

So the MSRP is similar but you can probably save a little bit more money with Brooklyn Bedding Signature.

Leesa is about a true medium on the soft to firm scale, meaning it can accommodate a wide range of sleepers. But if you want something that’s truly firm or truly soft, the Original bed is probably not for you.

The firmer option from Leesa is Leesa Hybrid. The softer option is Leesa Legend. But the Original model is typically good for all sleeping positions. Again it’s between a 4 and a 6 on the soft firm scale. Because that bed is made entirely of foam, it’s best for people that weigh under about 230 pounds.

Brooklyn Bedding Signature it actually has coils. It has 8-inch pocketed coils as its base, so it’s gonna be a little bit more responsive, a little bit more bouncy, but the feel is still somewhat similar to Leesa.

One differentiator for Brooklyn Bedding is that they make a soft, medium and firm option. So if you do know that you want a plush bed, choose the soft option obviously. If you want a little bit of a firmer bed, maybe around a medium firm, try the firm model.

If you want something that’s just shy of a medium, a little softer than Leesa, try the medium option from Brooklyn Bedding Signature.

But whether they have three different firmness models or just one, they do a good job of being able to play to all different types of sleepers.

By now you’re wondering why would I get one over the other and I can totally understand why you’d be asking yourself that because I haven’t even gotten to the good stuff yet.

One big thing for Brooklyn Bedding Signature is obviously the firmness levels and I think some people will prefer being able to choose a firmness level. There’s also a downside to that because it just adds a little bit of a wrinkle to that purchase process.

Some people are saying I just want a comfy foam bed, that’s all I want. In that case just get Leesa.

Another thing for Brooklyn Bedding Signature mattress is that because it has those coils, for a heavier individual, it’s probably a better bed.

Just in general, across all of my reviews, I typically say if you’re over about 230 or 250 pounds, get a coil bed. Brooklyn Bedding Signature isn’t specifically made for extra heavy individuals. They make a bed that’s called the Titan mattress, but I would rather you start with a coil bed than an all foam bed if you are pushing 250 pounds.

Another thing related to those coils is that a lot of people just have a nostalgic feeling towards an innerspring bed, and you want the bounce, obviously you’re gonna get that with the Signature mattress and not with Leesa.

Leesa definitely has its upsides. Again it’s just a comfy soft foam bed. I would consider it actually slightly better for couples because it’s extra accommodating. I bet less than 5% of people return the bed. And maybe a little bit better in terms of motion isolation.

I think they’re pretty much on par in terms of edge support, but because it’s made entirely a foam, I think it’s gonna absorb motion a little bit better than Brooklyn Bedding Signature.

If you get the softer models of Brooklyn Bedding Signature, you’ll notice if you have two people on the bed, you will kind of roll together here there because it’s such a soft model. The soft is pretty soft, the medium is pretty soft. You’re probably not gonna get a whole lot of that effect happening on Leesa. Obviously if you get the firm model with Brooklyn Bedding, there’s probably not gonna be a problem there at all.

I’m kind of splitting hairs, but if you are trying to choose a bed for two people, as much as I really like the Brooklyn Bedding Signature mattress, Leesa might get the edge. But again you could try it and just return it if it doesn’t work.

Another thing for Leesa is the fact that it does not have coils. I know I’m just like one thing is a positive, one thing is a negative. There are trade-offs to everything. There are certainly advantages of having coils and there are actually some nice advantages not having coils, namely a little bit better motion isolation, and some people do not want that bouncy feeling to their bed. They just want a comfy bed and that’s basically exactly what Leesa is.

That is a very long-winded way of saying get Brooklyn Bedding Signature if you want a super affordable, really comfortable innerspring mattress and get Leesa if you just want a comfy soft foam bed.

I know there are other little things and I could split hairs through this entire article, but most of it is gonna come down to innerspring versus all foam bed.

Maybe a little bit of a price advantage for Brooklyn Bedding Signature and then some other things around the edges.