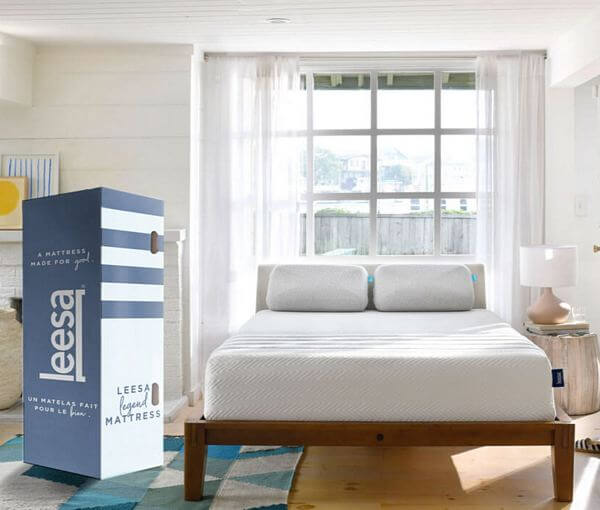 I’ll go over what it’s made of, run some tests, and give my pros and cons. I’m going to start by talking about what it feels like. 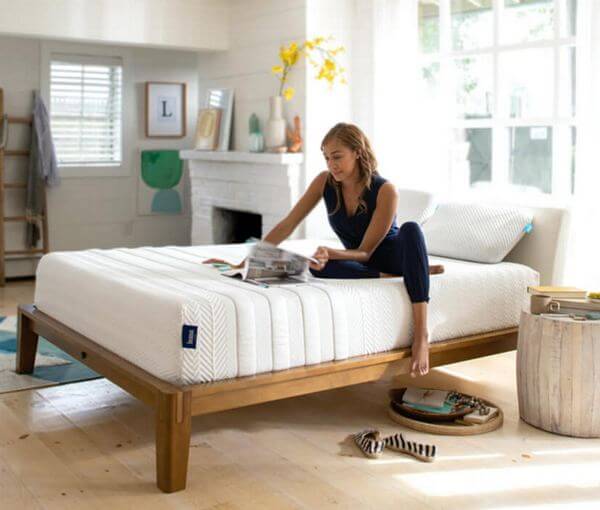 The first thing I like to cover when talking about the feel of a mattress is its support level. I give the Leesa Legend about a 5.5 out of 10, which means it is a pretty soft mattress in my opinion. I’m actually sinking in a little bit when I’m sitting on it.

I have reviewed the other Leesa’s mattresses. In my opinion, the Leesa Legend is the softest of the Leesa line.

What that means is when I’m lying on my back, I do feel myself sinking into the mattress. My hips are sinking in pretty deep there, but I am able to change positions easily.

There’s good mobility on the Leesa Legend, thanks to the quick response to pressure of the comfort foam as well as the nice bounce from the pocketed coil support layer. I wasn’t stuck at any point when I was rolling around, changing positions.

The big benefit from a soft mattress like this is the side sleepers out there are really going to enjoy it.

I generally think side sleepers love a soft mattress because you’re able to sink deeper into bed. You’re not going to get that jammed-up feeling at the shoulders.

Another thing that’s a big positive for the side sleepers is that the Leesa Legend has zoned support.

One drawback though of a softer mattress is that when you roll onto your stomach, your hips are going to sink deeper in, which is going to give you a little bit of a bow in your back, which could cause you to wake up with aches and pains in your lower back.

To summarize, I would say if you’re a back sleeper, it’s OK. Just know that you are going to feel like you’re sinking into the bed a little bit.

Side sleepers are going to like the Leesa Legend.

Stomach sleepers are probably going to want to find something with some firmer support.

To give you a better idea of what’s going on with Leesa Legend, let’s talk about the construction.

First up, the cover is a hypoallergenic combo of organic cotton and merino wool. It’s actually a nice light feel to it, and it’s breathable. That’s going to help sleep a bit cooler.

The comfort layer below that is a soft poly foam. It’s got a quick response to pressure. That’s going to help with the mobility of the mattress.

I should also note that it is aerated, which means there’s holes punched through it to help with breathability. Again, help you sleep a bit cooler.

The next layer is the most interesting in the Leesa Legend, in my opinion. There are micro-coils. This is the zone support layers.

At the head and foot of the bed, you have micro-coil layer, which is going to add some bounce to the mattress, provide some extra mobility.

In the middle of the mattress, they have a layer of poly foam which is a bit firmer than the micro-coils. That’s going to add that zone support, which I was saying helps with that side sleeping spinal alignment.

Below that is a poly foam transition layer. It’s a bit firmer than the other layers on top of it and acts as a transition from the comfort layers on top into the pocketed coil support at the base. It’s really bouncy layer.

One thing I want to point out is that pocketed coils are individually wrapped, so it is going to give you that bounce you might expect out of a traditional innerspring.

These coils move independently, so it’s going to be a bit better at isolating motion transfer than those old steel coils you might be used to.

Now, instead of just taking my word on the feel of the Leesa Legend, I like to run a few tests on all of the mattresses that I review. 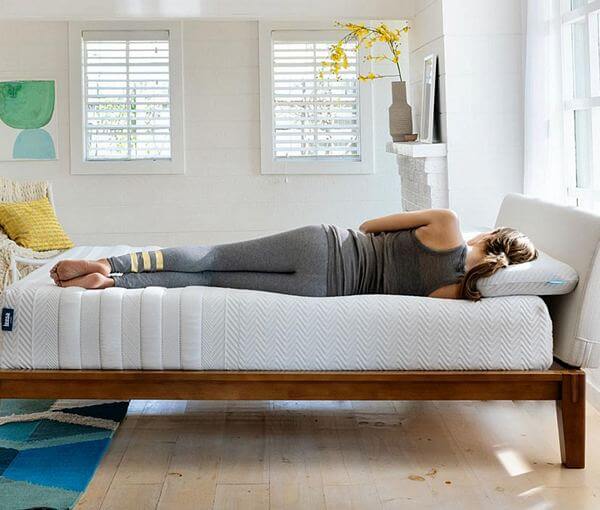 The first one up is the pressure map test.

Just like it sounds, I put a pressure map down on top of the mattress, lie down in a few positions. I can see the results next to me ranging from blue for low pressure to red for high pressure.

Lying down on my back, my weight is evenly distributed. I can see it’s blue across the board. That’s pretty much what I was expecting.

You should know that you are going to feel like you’re sinking in a little bit to a softer foams on top of the Leesa Legend, but you’re not going to feel any specific pressure points when you’re lying on your back.

Rolling onto my side, this is where this test gets interesting.

With firmer mattresses, you can see spikes into the yellow or even red range. It’s at places like the shoulders and the hips, which are problem areas for a lot of side sleepers out there.

I was impressed with the ability of the Leesa Legend to relieve pressure. I can see that it’s blue mostly across the board.

There may be a little bit of green there at the hips, but overall this is a really good result for the side sleepers that are worried about pressure relief with the Leesa Legend.

Finally, rolling onto my stomach, I can see that it’s pretty much blue across the board. Again, you know that it doesn’t really tell the whole story here with stomach sleepers. I did feel my hips sinking in. Like I said before, if you are a stomach sleeper, you’re going to want to find something a bit firmer. 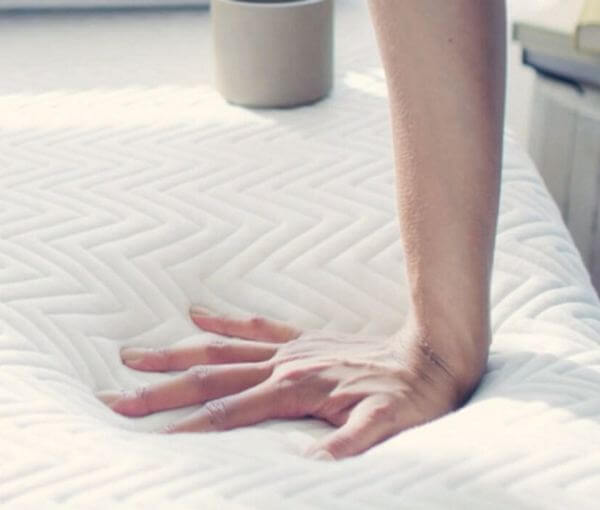 Another thing that I like to test is the bounce of a mattress.

If you do change positions during the middle of the night, a mattress that’s on the softer side, you’re going to sink into bed. You might feel a little bit stuck in the layers.

I did not get that at all with the Leesa Legend.

I found that there was great mobility, I was able to change positions easily even with that softer feel.

Finally, a test that goes hand in hand with that bounce test is the motion transfer test.

Basically, I put a seismometer down on the mattress where you might be sleeping.

On the other side of bed, I drop a 10-pound steel ball from heights of 4, 8, and 12 inches to simulate someone getting into and out of bed, rolling around in the middle of the night.

That seismometer tracks the disturbance with each of those drops.

If you share your bed with a restless sleeper, are you going to wake up when they’re moving around, getting into and out of bed, things like that?

I was pretty impressed with its ability to isolate motion transfer with the four-inch drop.

If you do share your bed with someone who adjust or rolls around in the middle of the night, you’re going to be OK on your side of the bed.

With the 8- and 12-inch drops, it got to be a little bit more of an average result on this test. It is a bouncy mattress. That’s to be expected.

If you do have a pet or young kids that jump into bed in the middle of the night, it will probably still wake you up on your side of bed.

Like I said before, the Legend is only one of the mattresses in the Leesa line. Now I want to cover the other models quickly.

First up is the Original Leesa, which is an all-foam bed-in-a-box mattress, uses a poly foam over memory foam construction. That does two things.

It defends against the heat trap that memory foam can sometimes be known for as well as the stuck feeling that some people get from the memory foam.

Overall, I would say it has a nice medium firmness with some good mobility that I really like for the combo sleepers out there.

Next up is the Leesa Hybrid, which has a bit more in common with the Leesa Legend because it is a combination of foam and coil layers.

The foam on top of the Leesa Hybrid is pretty similar to the Original Leesa, but it does have a little bit more support and bounce, thanks to the pocketed coil support layer.

I was also impressed with its edge support and ability to isolate motion transfer, which is why I really like it for the couples out there.

Those are quick hits on the Original Leesa and Leesa Hybrid mattresses.

If you want to check out the full reviews, I’ll put the links at the end of this article. 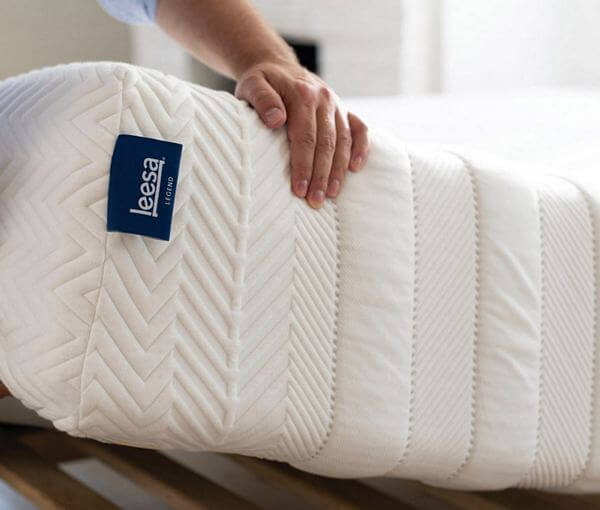 Before I end the review, I want to give you some of my pros and cons for the Leesa Legend.

First up, reasons I would recommend it to you include if you are a side sleeper.

Like I said before, it is a softer feel, which is what I like for the side sleepers out there.

I was also happy that it had these zone support systems. It’s going to keep those hips from sinking too far in the mattress, keep the spine aligned in a good position.

I would also say it’s a great mattress if you’re looking for a bit of bounce. A lot of softer mattresses just have you sink deep into bed. You might feel a little bit of a trap feeling, but the pocketed coil system in the Leesa Legend did a really good job of allowing me to change positions and adjust sleeping on a softer bed like this.

Also, it’s a great choice if you suffer from a bit of shoulder pain. Like I said, it’s going to allow you sink deep into the mattress. You’re not going to feel all jammed up when you’re lying on your side.

Reasons I would say it’s probably not the best choice for you include if you are a stomach sleeper.

If you spend most of the night on your stomach, you’re going to want something with a firmer support to keep your hips from sinking too far into the mattress, so your back isn’t bowed throughout the night.

Also, I would say if you’re a bit on the heavier side, you’re going to want to find something with a firmer support system so you don’t push too far into bed.

They do have a 100-night trial period. You can have it in your home for just over three months, deciding whether you want to keep it or send it back.

It will ship for free.

It will arrive compressed in a box. You’re going to want to let it decompress for a few hours or even overnight for you to sleep on it, so you get the full support and feel of the mattress.

The Leesa Legend comes with a 10-year warranty. I would say that’s pretty much the standard for the online bed-in-a-box market.

Prices depend on the size you choose and they range from $1799 to $2599. However, Leesa often offers discounts so be sure to check their website for the current pricing.

At the time of writing this article, 62 out of 73 (85%) reviewers recommend this product.

That’s it for my review of the Leesa Legend.