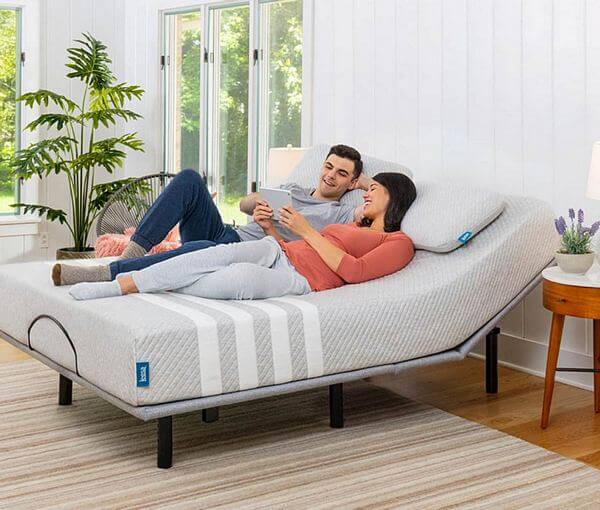 Here I’m doing a review of the Leesa adjustable base. 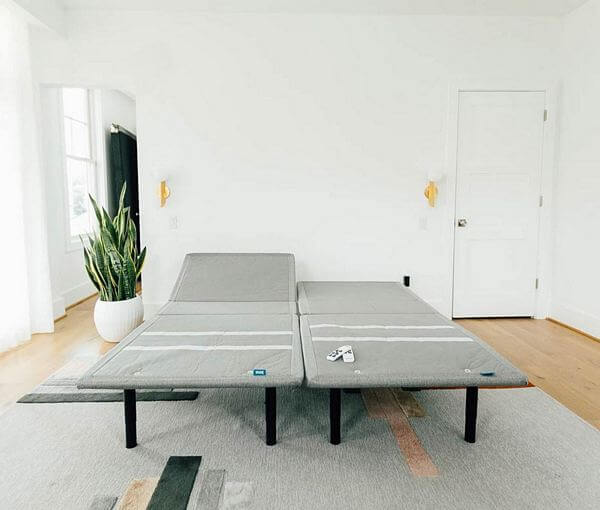 Let’s go over policy stuff for the Leesa adjustable base.

You also get a 30 night trial period with this bed frame to decide does it actually meet the description that’s on their website or no, I do not want it anymore.

Once you understand the features of this adjustable bed frame, you’re probably going to keep it, but nonetheless Leesa gives you a 30 night risk-free trial period.

In the event that you don’t like it, they will give you all of your money back inside the trial period.

And then it comes with a tiered 25 year warranty.

The bed frame itself is made in the United States, just like their pillows, their sheet sets, their mattresses. The remote though is made in China, but who cares.

That’s the policy stuff for Leesa’s adjustable bed frame. I love the fact that it comes with a trial period and the option of free returns. But I don’t really think many people are gonna actually use that stuff.

I guess that’s kind of why they offer it because they know you’re probably keeping it.

Let’s cover the setup process for this adjustable base.

Setup process is actually pretty quick. It’s like 25 to 30 minutes, probably less if you’re competent and you can use a screwdriver. Probably a little bit more if you never read the manuals for anything.

Setup process is not any harder than IKEA furniture. I think you’ll be fine with setting up this one. In fact, it’s one of the quicker ones to set up and get ready to go.

As far as the design, I think this is one of the best-looking adjustable bed frames. It has a totally minimalist design, but it has that light gray fabric exterior, it’s thinner, it has the very large front rail that does a great job of keeping your mattress on the bed frame.

I think a lot of people will say it looks nice in my room and it does what Leesa says it will do.

As far as sizes, they have a twin XL, a queen, a king, a Cal king and then they have a split option for the king.

If you put two twin XLs next to each other, that’s how you get the king. Even though they offer the true king and the true Cal king, they will show up in two separate boxes and you’ll be conjoining two different bed frames.

You can sync them together though so that they act in unison. Or you can use them independently if you want the split option.

I think that was a clever way to fix things because some adjustable bed frames don’t come in the Cal king or they don’t come in a proper king, they might have the split option, but they don’t have everything.

So Leesa offers reasonable sizes that you would want in an adjustable bed frame.

Typically they will offer promotions. Click here to check the latest pricing and to see about the deals that they’re offering on it right now.

But I think you can probably expect to pay about $1200 flat for the queen-size bed frame. 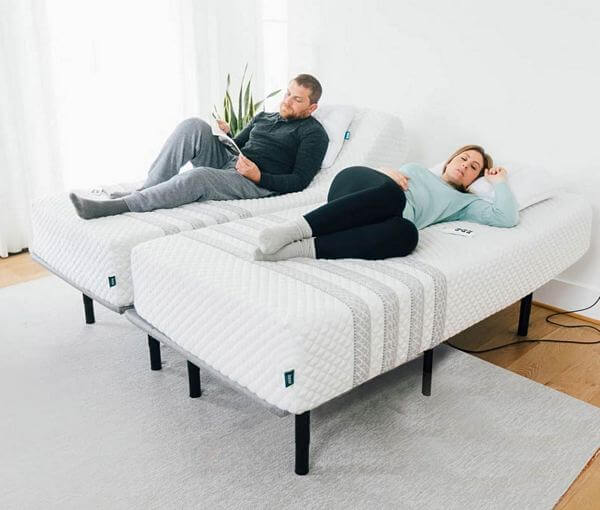 Getting back to design.

A few of the other things that I really appreciate about this particular bed frame is that it can hug your wall.

When you articulate it up and down it’s not gonna scrape the wall. You can get it really close to the wall. I love that if you adjust the top portion, it’s not affect the bottom portion whatsoever.

One thing that I’ve only seen on one other bed frame is that it has little adhesive strips towards the bottom third that keep your mattress on the bed frame. So when you go to adjust it, the bed doesn’t want to pop up. It actually sticks down. It’s kind of stuck in and sucked down onto the bed frame.

So the Leesa bed will stay stuck to the actual bed frame and will mimic its design almost perfectly.

That’s not the case with a lot of bed frames. I love those little adhesive strips. That’s an example of a very clever feature that’s super useful.

Big thumbs up for adhesive strips.

As far as the motor and the adjustment mechanisms, they seem pretty strong to me.

Probably not as strong as if you put to bed frames next to each other and you’re adjusting one bed.

The motors nonetheless are pretty good.

I think probably the main reason why people would get this is either they already have a Leesa mattress or they just appreciate this simple design of it.

It adjusts, it does what I was hoping that it was gonna do, and pretty much nothing else.

If you just look at the remote (yes, it has a wireless remote, which is great) it doesn’t do much. You can adjust the head, the foot, up or down, you can adjust them both at the same time. 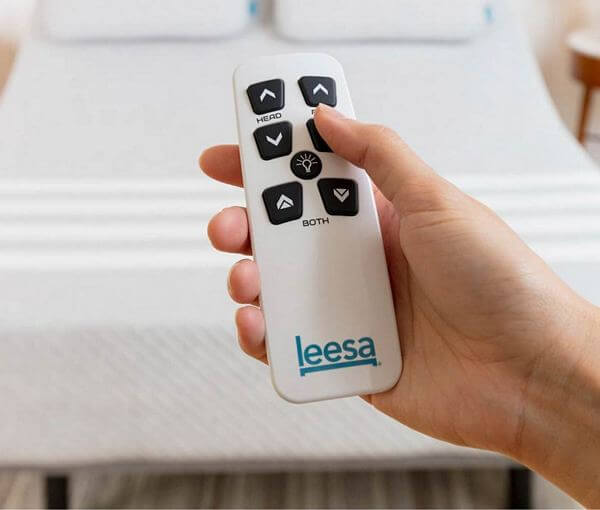 There is no dedicated flat button. There is no built-in massager, there’s no flashlight for the remote. There is just a little light under the bed, which does a good job of illuminating everything under there if you want to search for something.

I wouldn’t count it as a game-changing feature. It’s just one little light to help you figure out what’s underneath your bed.

Again, no massager built into this thing, there is no dedicated zero gravity button, although you can easily get it into the zero gravity position and I haven’t figured out a way to set program to memory settings. There is no dedicated memory button. If you want to watch TV in it, you’re gonna have to adjust it up or down to fit that position. You can’t just click one button and it goes there.

I see that on most adjustable bed frames so I’m surprised that they don’t have that or somehow I can’t figure out how to get it.

That’s what you need to know about Leesa’s adjustable base.

As I said it before, what it does, it does well.

You’re gonna get this thing because you have a Leesa mattress or you really like the simple minimalist design and you just want something that does a good job of articulating up and down.

I personally don’t think the price point is crazy.

I give the Leesa adjustable bed frame thumbs up. It is missing some features but it’s just a solid adjustable base.

Best Adjustable Bed Base With Massage