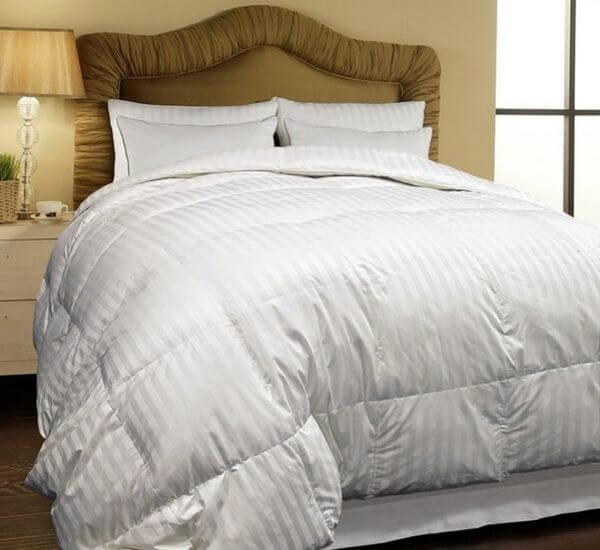 This article is going to explain how to easily put a down comforter inside of the duvet cover.

I hear a lot of stories about people having challenges accomplishing this task and it can be daunting if you’re not doing it properly.

I have a few quick tips here that will help you to easily accomplish this.

To begin with, it would be best if you have two individuals to do this task. However I’m going to explain how you can do it with one person and do it in literally seconds.

This is more true with a king-size bed.

A king down comforter is wider than it is longer, so if you don’t orientate that down comforter properly, you’re gonna end up with a lot of extra fabric at the bottom or the top, which you don’t want.

How to Keep Down Comforter From Slipping in Duvet Cover

Is your down comforter moving around inside your duvet cover and it’s driving you crazy?

This happens occasionally with some people and they find it annoying.

Here is how you can easily remedy this problem in about ten minutes of efforts and about a dollar fifty in cost.

You find it when you’re getting up in the morning your down comforter has snuck down on the foot of the bed and you just have a lot of loose fabric up at the top of the bed.

Here’s what you can do to fix this problem permanently.

You need a few items.

Get yourself a pair of scissors, needle and thread, and a shoelace.

You’re going to take the shoelace and you are going to cut two pieces that are about 10 to 12 inches in length.

Then you’re going to cut two pieces that are about two and a half to three inches in length.

Then you are going to start with the down comforter.

You are going to put some ties in the down comforter and the duvet.

You’re going to take the top edge, the area that is closest to your face, and you are going to sew the little strap across the corner.

Here’s a word of caution.

When you’re sewing this, you’re going to want to sew to the very outside edge of that down comforter.

Many people have a cord around their down comforter, there’s a little area of extra fabric. That’s where you’re going to want to secure it.

You’re not going to want to sew this inside the area or the compartment where the down exists.

This will receive a little bit of tension and over time that tension is going to pull on the shell or the ticking of the down comforter and it’s going to start creating a little hole .

Trust me, that down will find its way out of that hole every time.

So sew it to the outward edge and you want to sew it nice and secure.

You’re going to do this on both corners.

With the duvet cover, what you’re going to do is turn it inside out.

Go to the top corners that are the closest to your face and you’re going to want to secure the larger strap right in that corner, the intersection where the side meets the top.

Sew it nice and secure.

Now what you’re going to do is simply loop the larger piece into the small piece and just tie it into a bow.

Some people will put four of these ties in their duvet cover and down comforter. It’s really not necessary and the reason is it’s gravity that’s pulling that down comforter down.

Down comforters don’t fall up, they fall down.

And having them down at the bottom corners really isn’t doing you any good.

Some people will put three of them and they put them along the top edge. Because sometimes what can happen is you’ve got it secured up in the corners and you might get a little loop or separation in the middle.

So feel free to put one smack dab in the middle of the down comforter and the duvet cover.

Anyway, this should remedy your problem.

How to Clean a Down Comforter