How to Clean Smelly Towels 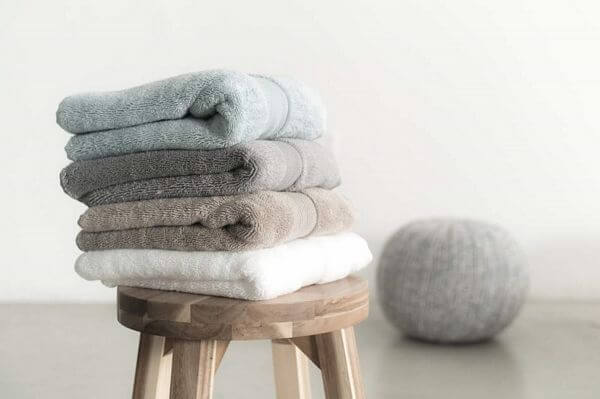 The traditional towel you will pick up at your local department store is likely a cotton terry weave.

Terry refers to the loop structure in the towel. It’s a cotton material and it is designed to suck in moisture and feel plush on your skin.

But we all know that over time thick absorbent terry towels become not so, and they actually have two key issues.

First they smell and second they feel scratchy,

These are both solvable problems as long as we know what we’re dealing with.

I’m going to share with you three ways to clean your smelly towels and to get them smelling and feeling great. 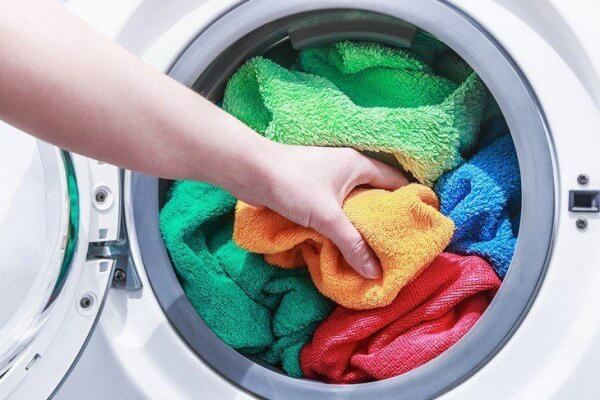 The reason why terry towels get smelly is because generally towels are made from cotton and cotton is a natural fiber, meaning that it is bacteria prone. Bacteria causes odors.

That means when you hop out of the shower, you want to make sure your overhead exhaust fan is on and that your towel is hung to dry and fully stretched out.

If you don’t have a towel bar, if you are just relying upon a hook, a hook is not good enough, air is not going to circulate and reach the towel the way it needs to. Use your towel bar or some other structure that can help to dry the towel quickly. Then you can place it on the hook.

Know When to Take Towels Out of the Dryer

Another tricky situation is taking your towels out of the dryer at the right time.

Because if your towels aren’t dry enough, they are going to be folded up, put into your linen closet and they will start to get musty or stinky.

The issue is sometimes you can take a towel out and it feels dry, but it is still retaining moisture and that’s because towels are so thick and absorbent. They can be quite tricky.

If you want a little tip or a way to figure out if your towels are fully dry, you can actually hold them up to your mouth and suck in quickly. I know it sounds strange but it works. You’ll be able to detect whether there’s moisture there or not.

You want your towels bone dry out of the dryer and if they’re not, they’re going to smell.

Fluff Up After Line Drying

If you line dry your towels, whether outdoors or indoors, you might notice that they come out looking a little flat and they don’t feel soft and fluffy. Rather they’re a little bit scratchy and uncomfortable.

What you can do is take your towels (this takes a little bit of extra work but it does make a difference) and just quickly rub them together to fluff them up again. Or you can get yourself a soft bristle brush and just give it a quick sweep.

If you have a steamer, a steamer can work too, giving a couple quick passes over the towel to fluff it up. It is a great option as well.

If you think about a towel, it’s unlike any other item you’re putting into the washing machine.

It is thick, it’s heavy and it’s large and it is designed to absorb. So what’s going to happen when it goes into your washing machine?

It’s going to absorb all the water and all the detergents, and all the fabric softener, if that’s what you’re putting in as well.

Towels actually don’t need a lot to get clean. What happens is you get into this cycle where you think “my towels are smelly, I’ll add more detergent to get out the smell”, that’s actually the wrong thing to do and you’re just going down the wrong path.

What you need to do instead is make sure that you are always properly dosing the amount of detergent for your load and that you’re not over filling your load,

Because if you’re putting too many towels in the machine, especially if it’s a high efficiency machine, the machine is not going to be able to spin and get the small amount of water that it is designed to use, efficiently distributed among all of the items in the washing machine.

What about fabric softeners?

I just don’t believe in them.

What I find frustrating is when I see commercials of towels stacked up one set beside the other and they’re like this one uses fabric softener, this one doesn’t.

I don’t buy it for one second!

Towels are actually so absorbent that fabric softener, which is a waxy coating to condition your fabrics, loosen their fibers and make them feel softer, actually gets absorbed right into the towel.

So when you watch videos of people laundry stripping, what they’re getting rid of is all of that built up detergent and fabric softener.

Fabric softener is doing you no favors!

If you actually want to have soft fluffy towels, use vinegar instead of fabric softener and make sure that you’re using dryer balls.

How to Get Rid of Smelly Towels

You don’t have to go to the extreme and do laundry stripping. I’ve never done it, because I don’t have time for it, I don’t want to do it and I can get the same thing done in my washing machine.

So what you’ll do is you’ll add, depending on how many towels you’re going to do at a time, one to two cups of plain white vinegar, inexpensive and easy.

You’re not putting any detergent in there, rather you’re just using vinegar.

Then you’re going to run your cycle through on the hottest possible setting your machine has.

What vinegar can do is break down some of the detergent and the soap that’s stuck in there and baking soda is going to help to freshen things up and deodorize.

At the end you’ll put your towels into the dryer and they should come out fluffy and smelling clean.

If your towels are in really bad shape, you might have to do this again. But once you’ve done that, you’ve essentially hit the reset button and your towels are going to be in much better condition.

Also keep in mind that towels do have a lifespan.

At about seven to ten years you might want to consider taking your used towels to a pet shelter, who absolutely love receiving them, and treating yourself to a new set.

You might be asking yourself if everyone knows how prevalent these terry towel issues are, why hasn’t a better solution surface. I’m here to tell you that actually it has.

There is a better solution.

The answer is microfiber!

And I’m going to tell you why.

Microfiber is designed differently than terry for several reasons.

First of all, it’s not a natural fiber like cotton, so it won’t harbor bacteria, meaning microfiber towels don’t actually smell.

If you look at the actual weave, a microfiber towel is a waffle weave, which is designed to efficiently absorb moisture and release it quickly, meaning that it dries you quickly and then it dries itself quickly. Unlike terry, which is very thick and absorbent and takes a long time to dry.

If you think that microfiber feels uncomfortable on the skin, you just haven’t tried a microfiber towel yet, because they don’t feel like a microfiber cleaning cloth. They actually feel quite soft and smooth. they’re just heavy enough to feel luxurious, but they’re not too heavy that they take too long to dry.

So now you know everything you need to know about how to clean smelly towels and having clean fresh smelling towels for life.

My hope and intention for you is that you never encounter a smelly towel again.

That brings me to a question, which I know is a hotly debated topic among people: how often should you be changing your bathroom towels?

In my home, we used to change our towels about two times a week. I used to think that after three or four uses, it can go to the wash.

But after discovering these antimicrobial bath towels, I wash them less often. These towels are infused with natural silver that kills bacteria. They are awesome and I really like them!