How to Clean a Down Comforter 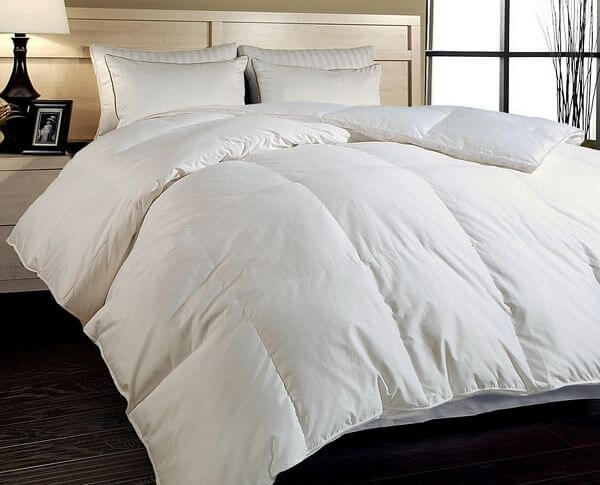 In this article I’m going to talk about how to clean a down comforter.

Down comforters do require cleaning. A point of reference, I clean mine in a spring and in the fall, so two times per year. Sometimes more than that.

They get loaded up with dead skin, dust mites and other things, so it’s a good idea to clean them regularly.

Prevention is probably the best method, so if you launder your duvet cover a little bit more frequently, you won’t need to launder your down comforter as frequently, but you will want to clean it periodically.

There are two methods of cleaning. One is dry cleaning, the other is laundering. I prefer laundering and here’s the reason why.

Dry cleaning utilizes the chemical perc and perc is a known carcinogen and it is absorbed into the down fiber itself as well as the cotton shell.

It leaves a residue and because you’re sleeping next to that, next to your mouth, and breathing in that residue every night, I think it’s not that healthy of an arrangement.

That’s why I prefer laundry. 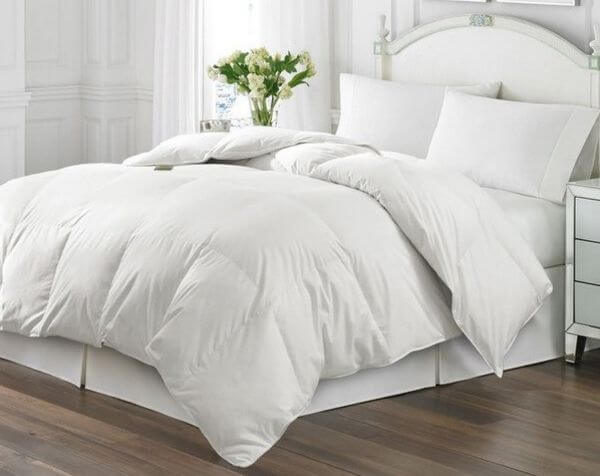 We take hours to a laundromat and here’s the reason why.

The dryers are significantly larger in a laundromat than you would probably had at home. Likely about three times the size.

Most laundromats have the high-efficiency washers, meaning they’re going to clean it a little bit better.

In addition to that they have the high speed extractors, that big centrifuge just spins a little bit more water out of them.

But most importantly, it’s the dryers.

The drums in most laundromats are two to three times larger than a dryer drum that you may have at home. This allows the down to tumble more fully, allows down to loft up and fluff a little bit better. I think for that reason alone, a laundromat is better place to clean your comforter. 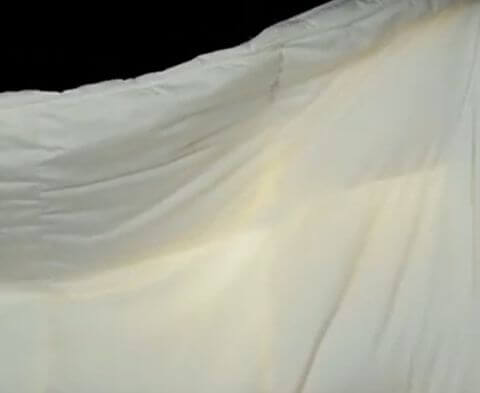 When you’re removing your down comforter from the duvet cover, this is a great time to check the condition of the down comforter, because they do wear out, especially in the shoulder areas.

All you need to do is hold it up to a room light or a window where this natural sunlight is coming in. If you notice that the compartments in the shoulder area contain very little down (or no down at all), it’s time to consider replacing it.

Off to the laundromat.

You want to scale it back a little bit from the recommended amount. Here’s why.

If you don’t rinse all of that detergent out of the down comforter, it’s gonna coat the down fiber, it won’t fluff up as well or it won’t fluff up to its original size and you’re not getting the amount of insulation from that comforter out of it as you could.

In addition, if there’s a residue of detergent on it, that detergent can collect other debris and just gets dirty a little bit faster.

Here’s another step that we take,

We add half a cup of bleach. Bleach is a little bit hard on a down comforter itself, on down and the cotton shell, but I think it’s well worth adding the bleach because it gets rid of dust mites.

Almost all bedding contains dust mites, and bleach will help get those out of your down comforter.

I only wash twice a year, so it’s not continued washings every week with bleach. It may cause a little bit of damage, it may take a little bit of life out of the comforter, but I don’t like sleeping with dust mites. So I put bleach.

Once the washing machine has done its thing, you are going to take it over to the high-speed extractor. Most laundromats have a high-speed extractor and what this is going to do is take a little bit more of the water out of your down comforter, once again speeding up the drying process.

Out of the extractor and over to the dryer.

You may notice that the down comforter looks absolutely flat once it comes out of the wash machine. Not to worry! It’s going to fluff back up in the dryer.

Put your down comforter inside, throw in your money and let it begin the drying process.

I start off at a high heat. You’ll notice that in about 10-15 minutes that down comforter is gonna start to come back to life, it’s going to start filling up the dryer compartment.

I stop the dryer, take it out and re-orientate it.

The reason you’re doing this is because the outside of the comforter itself is getting warm, while the inside is going to still be very damp.

If you find that the down clusters in the compartments of your comforter are bunching up a little bit, this is a good time just to agitate them with your fingers a little bit, just to fluff them up, again improving or speeding up the drying process itself.

Some people are using tennis balls to aid in keeping it fluffy. You certainly can, it’s not gonna hurt anything. I just use my fingers.

Put it back in the dryer. Now you’re going to set the dryer temperature at about medium.

You’re going to do this about every 10 minutes.

When you think it’s totally dry, what you’re going to do is turn the heat down just slightly and give it another 5 to 10minutes. Most likely it is not totally dry and you do want to get it dry.