Duvet That Doesn’t Make You Sweat (Doesn’t Bunch Up) 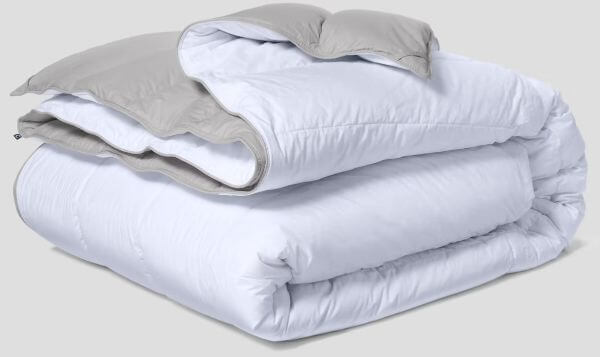 In this article I’m going to be going over the construction and feel of this duvet, as well as give you some of my honest pros and cons about it.

Let’s start this review by taking a look at the policies and prices for this duvet.

First Casper offers free shipping on this duvet within the contiguous United States and most of Canada. Customers in Hawaii, Alaska, the northwest territory, Yukon territory and Nunavut in Canada will have to pay an additional shipping fee.

Next Casper offers a 30-night sleep trial on this duvet and that means you can test it out at home for 30 nights. If you decide it’s not for you, you can return it for a full refund.

Finally Casper offers a one-year warranty on this duvet.

This duvet comes in a few different sizes and weights, so there are quite a few different price points. I won’t bore you by listing them all out, but they range from $309 on the lowest end to $459 on the highest end.

Now let’s take a look at the construction of the Casper Humidity Finding Duvet.

The outer shell is made from 100% cotton and cotton is a great fabric for humidity fighting because it’s super breathable. It’s also really durable.

Inside this duvet there’s a layer of merino wool. Merino wool comes from merino sheep, which are sheep that graze the beautiful highlands of Australia and New Zealand.

You’ve probably seen it in some outdoors clothing because of these awesome qualities.

the final ingredient in this duvet is the down fill, which is the main filling inside of this duvet.

This duvet has a chamber design, which means that there is stitching across the whole blanket that keeps all the fill evenly distributed across the blanket and keeps it from pooling on one side to the other.

The Casper Humidity Fighting Duvet is available in three sizes: a twin-twin XL size, a full-queen size and a king-California king size.

All three of those sizes are available in either a light weight or a mid weight option.

Additionally this entire duvet is machine washable, which is nice because that means you can sleep either right under it or you can add a cover if you so choose.

There are loops on the corners to attach your desired duvet cover with. 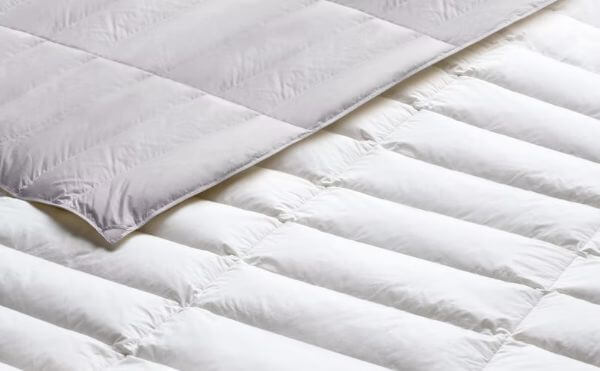 Overall I thought it was super light and fluffy. It honestly kind of reminds me of a puffer jacket but with a much softer exterior.

When I was laying under it, it felt super light and crisp and if I wanted to move around or throw it off of me in the night, it’s really light. It’s just easy to move around with this on top of you.

I would say it feels really soft and cushy and it really just makes me want to roll up in it. It’s like a giant marshmallow, except not so sticky and sugary.

I did notice that this duvet did a really good job of keeping me cool. I didn’t feel any heat being trapped while I was laying under it, but it still kept me reasonably warm for being a duvet.

I do tend to get a little bit cold at night so I did add a second blanket on top of this duvet when I was sleeping with it.

It’s time for a pros and cons list. Let’s go over what I liked and what I didn’t like so much about this duvet.

First, I love how light and airy this duvet is. It feels super light when you lie under it. You can barely even feel it on top of you.

Combine that lightness with the cooling materials and it is a great option for hot sleepers.

Second I love this duvet is machine washable. That’s super nice because you can sleep right under it if you want to or you can always add a cover if you so choose.

Third I also love how high quality the materials used in this are and that gives me a lot of reassurance that this product is going to last a long time if properly cared for.

Now onto the cons.

I’ll be honest with you, I actually really like this duvet, so I don’t have too many cons for it.

But I will say that if you’re a cold sleeper who’s really looking for something to keep you warm during the cold winter months, this is probably not going to be the best pick.

It’s really light and it’s really airy and it keeps you super cool, so I think it’s really well suited for the summer months or if you want to use it year round. If you get a little bit cold, you could always add a blanket on top.

I will also add here that this is definitely not a budget buy. Considering the high quality materials, the price does make sense, but you can definitely find something a little bit cheaper if you’re on a stricter budget.