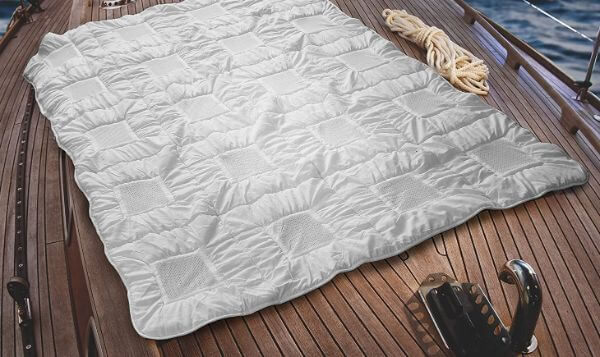 I don’t know about you, but I sleep really hot at night. Underneath a lot of different comforters, I wake up sweaty and clammy.

That’s why I was really interested to try out the ClimaBalance comforter, a comforter made specifically with hot sleepers in mind.

I want to talk about its design, my experience with it, who it’s a good fit for, and who it’s not a good fit for. Is the right fit for you? Let’s find out.

I want to talk about the ClimaBalance Down Alternative comforter, starting on the outside and then working our way in.

On the outside, you’re going to have a polyester shell, a little bit smooth to the touch with a little bit of a starchy feel.

Now, it’s held in place with a sewn-through design, keeps all that in place.

What makes this comforter stand out though is going to be the mesh squares. They call them high-tech mesh squares. All over the surface area of the comforter, you have these holes that allow for air to flow through to keep you cooler at night.

The company has done studies to find out how well it helps people sleep. They found that, over time, people sleep sometimes 50 percent better, experience more REM sleep, deeper sleep. It does work overall.

In terms of size options, you have twin, full, queen, king, large king, and California king.

In terms of washing, you can machine-wash it at home on a gentle cycle.

I want to talk about my experience with the ClimaBalance, starting off talking about feel.

Running my hand across the comforter is kind of rough. Again, it’s polyester, has a starchy quality to it.

I’ve read some other reviews online that people had issues with static electricity build-up when they’re underneath this blanket. People said they get out of the morning, they touch something and they get shocked.

I did not have this experience personally. The company says, “If you do have problems with this, you can put this into a duvet cover.”

The issue with that though is I feel like putting this into a duvet cover is going to ruin the effect of the squares with that airflow, especially a heavier duvet cover.

On top of that as well, the corners do not have duvet tabs. It’s hard to tie this inside of a duvet cover and keep it secure at night.

A big thing as well is loft with a comforter. How is the loft of the ClimaBalance?

I can say it is not very lofty. It’s a pretty thin comforter, not a lot of body to it, not a lot of loft, kind of lies flat across my mattress.

Last but not least, let’s talk about warmth.

Temperature regulation is the main focus on the ClimaBalance, but how effective is it? 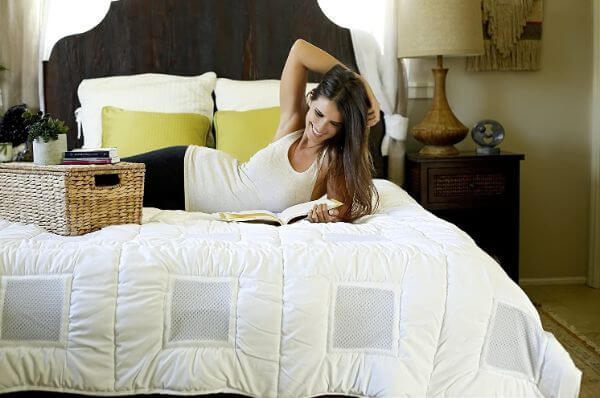 Let’s talk about the pros, or who I think the ClimaBalance might be a good fit for.

First off, it is a very good choice for hot sleepers, especially on those warmer nights during those warmer months. A lot of room for airflow with these mesh squares, so you should be sleeping quite cool underneath the ClimaBalance.

Also, if you’d like a thinner comforter, that’s the design you’re looking for, the ClimaBalance could also work for you. Again, it’s on the thinner side. It should lie closer to your mattress.

Last but not least, if you’re looking for a comforter that’s hypoallergenic, if you struggle with allergies, the ClimaBalance is also a good option. All these materials in it are hypoallergenic so you shouldn’t be waking up with those watery eyes or stuffy nose.

Now, let’s talk about the cons, or who the ClimaBalance might not be a good fit for.

Last but not least, if you’re looking for something durable, something of a more long-term investment, ClimaBalance is also not the best option. I’ve had it for a few weeks now. Just using it, I’ve already seen some fraying, some stitching coming loose. Reading more reviews online, it seems to be a common issue with the ClimaBalance.

Before I finish up, I want to answer a few frequently asked questions about the ClimaBalance.

I can say, just on the outside, it has a rougher quality to it. In terms of the design, it’s a thinner comforter, not very fluffy, a little bit rough on the hand, and doesn’t sleep too hot, doesn’t give a lot of insulation.

Does the ClimaBalance sleep hot at night?

I can say it does not. It actually sleeps quite cool, a lot of room for airflow at these mesh squares, air flowing across my body. I am not sleeping hot underneath the ClimaBalance.

How much does the ClimaBalance cost?

In the end, I think the ClimaBalance is going to be a good fit for hot sleepers and those who struggle with allergies.

However, people who want something fluffier, something to keep them nice and warm at night are probably going to want to look elsewhere.