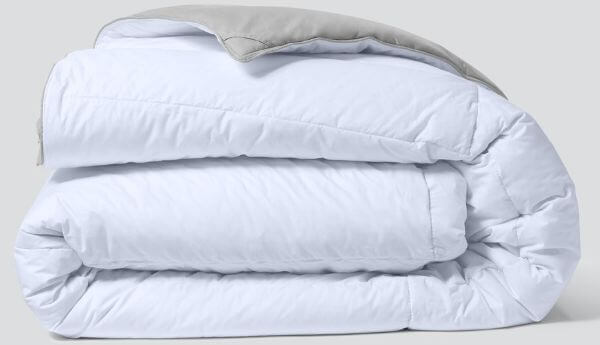 I’ll admit it, I’m a hot sleeper and a lot of nights, I wake up hot and sweaty. That’s why when I heard about the Casper Humidity Fighting Duvet I was really interested.

They call it a duvet, but it is also a comforter. They use this term interchangeably a lot when you’re shopping for comforters and duvets. I want to make this note right now.

This is a duvet insert but also a comforter. I might also call it a comforter, but just to note as I’m getting started.

What makes this so special? Let’s start on the outside and then work our way in.

First off, on the outside it has 100 percent cotton shell, very smooth to the touch. It’s also flippable or reversible, so on one side you have beige color, on the other, you’re going to have white color.

Inside the duvet, you’re going to find responsibly sourced duck down with a fair amount of loft, and a layer of merino wool.

The merino wool is what sets this duvet apart. This material is good with moisture wicking and also with heat dissipation. That is drawing heat away from your body making you sleep cooler at night.

In terms of color options, you just have this one option, beige on one side, white on the other. In terms of size options, you have twin, twin XL, full, queen, and king, California king.

Let’s talk about my experience with the Casper.

In terms of feel on the outside, it does have a nice smooth cotton feel, but it is crinkly. I will note that it is a noisier comforter.

People sometimes complain being under a noisy or crinklier comforter, it’ll make them wake up at night. I did not have this experience but definitely something to keep in mind.

Speaking of temperature regulation, that’s what this comforter is all about.

Let’s talk about the pros, who I think the Casper might be a good fit for.

If you’re a hot sleeper, this is a good match for you. It’s made with hot sleepers in mind, a layer of merino wool, very heat dissipating, a nice cool outer shell so hot sleepers should take a look at the Casper.

Those who are looking for something to use as either a comforter or a duvet insert, the Casper should also work for them. You have duvet tabs on the corner so you can tie it very easily into a duvet cover or use it by itself as a comforter.

Last but not least, those who are looking for something of a higher quality, more of a higher-end comforter, should also take a look at the Casper. Has some very nice materials, responsibly sourced duck down, merino wool, and 100 percent cotton.

If you want something higher end, something very nice, take a look at the Casper. 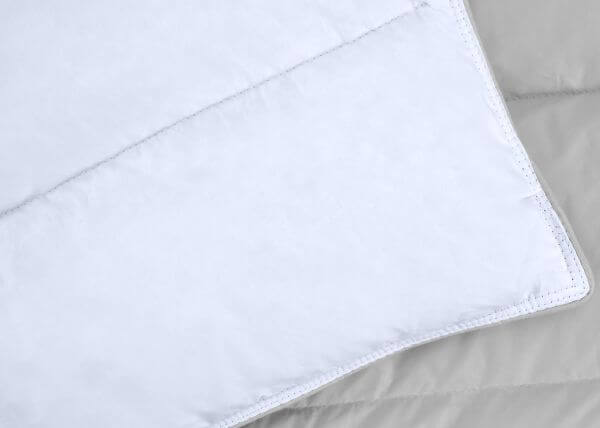 Let’s talk with the cons, who wouldn’t the Casper might not be the best fit for.

If you’re looking for something more affordable, something on the value-end, you might want to look elsewhere.

Right now, at full price for a full queen size this is almost $400. You’ll get a lot for your money, but it might be outside of some people’s price ranges.

Also, if you’re looking for something without down, you find down to be either unethical or you struggle with allergies, again, this has down in it, probably not the best match for you.

Last but not least, if you’re looking for something for those colder nights, those colder months, definitely not the best choice. It’s made for hot sleepers, for warmer nights.

If you want something to keep you warm and insulated, you might want to look elsewhere.

Now I want to answer some frequently asked questions about the Casper Humidity Fighting Duvet.

How much is the Casper Humidity Fighting Duvet cost?

I can say it does not sleep hot. With layer of merino wool, wicking moisture, dissipating heat, cool outer shell, I did not sleep hot. A lot of hot sleepers should probably have the same experience.

How fluffy is the Casper Humidity Fighting Duvet?

I can say it’s not super fluffy. Definitely has some nice loft to it. It’s a nice fill power in there. That being said, there’s not a lot of it. It’s not the fluffiest down comforter I have reviewed.

What is the difference between a duvet and a comforter?

The basic differences between the two are, a comforter is going to be one-piece, use it by itself. A duvet is going to be more of a set with a duvet cover and a duvet insert.

Where it gets confusing is you can use a comforter as a duvet insert, but those are the basic differences.

In the end, I was a big fan of the Casper Humidity Fighting Duvet. It’s a great option for hot sleepers and those who want something on the higher ends.

I will say, those who sleep colder, who need something warm and insulating, those who want to save some money, they might want to look elsewhere.

What’s also great though if you’re not sure if it’s the right fit for you, they do offer 100-night sleep trial and a one-year limited warranty.