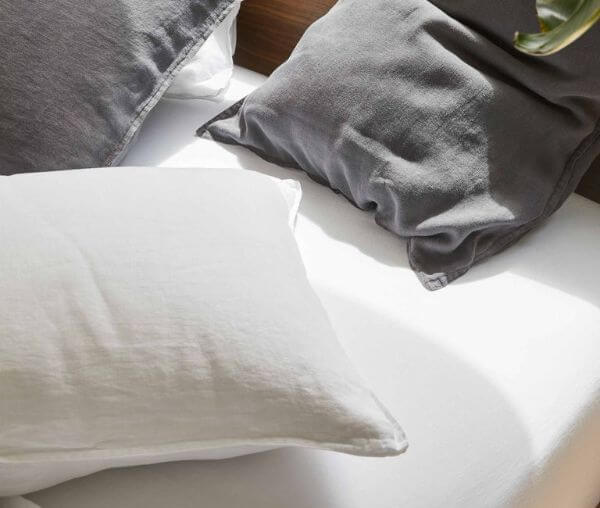 Here I’m taking a look at the Linen Hardcore Bundle from Brooklinen.

I’m going to show you what it’s made of, what comes with every bundle, whether it sleeps hot or cool. Everything you need to know.

The first thing, before I even get into the feel of these sheets, I have to say, I am loving the aesthetic of this bundle.

With a bundle, you’re getting a full sheet set plus a duvet cover and two extra pillowcases. The whole bundle makes for a put-together look.

Additionally, you are allowed to customize your bundles by mixing and matching different colors.

I’ve got the navy chambray for two of the pillowcases and the duvet cover. I’ve got the dune chambray, which is this pretty sand color.

Ultimately, I have to say, I’m digging the look of this whole bundle.

As far as the feel goes, it feels super soft on my skin.

It’s also very breathable, but it does have this distinctly semi-coarse, gently massaging quality that is so characteristic of linen. 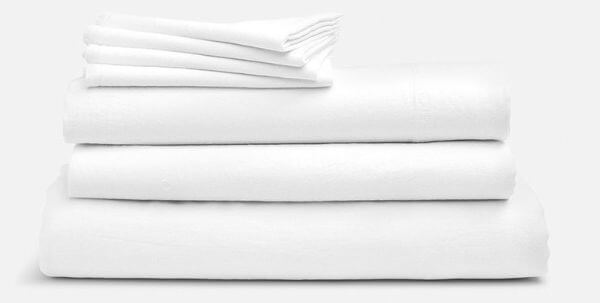 Let’s go ahead, and take a closer look at what exactly these sheets are made of.

Every piece of bedding in this bundle is made from 100 percent pure linen, which is one of the world’s oldest and most beloved textiles.

When I say old, I mean thousands of years old.

Why is linen still a fan favorite after all this time?

It’s extremely durable, it’s one of the most breathable fabrics on the market, and it’s
got a reputation for only getting softer as time goes on.

Linen is derived from natural flax fibers, which is a sustainably-sourced material.

Brooklinen sources its flax from Belgium and France, which are considered by many to offer some of the highest quality flax in the world.

Because flax fibers are thicker and tend to produce a stiffer yarn, as compared to cotton, for example, it does produce this distinctly coarse texture that some linen lovers are big fans of, but a lot of sleepers find to be almost a little too itchy and coarse.

To remedy this, the folks at Brooklinen individually pre-wash each piece of linen bedding to bring down that coarseness a little bit and boost the softness.

I have to say, I am not always super fond of linen bedding because of that coarse factor, but this is feeling super soft and smooth to the touch.

Another thing, linen is famous for its breathability. Because of that, it’s often a go-to fabric for the summertime.

It’s worth noting that linen is thermo-regulating, which means it adapts to your body’s temperature, so it is going to help dissipate your body heat in the summer.

It also serves as a great insulator in the wintertime. Because of that, linen is great for year-round use. 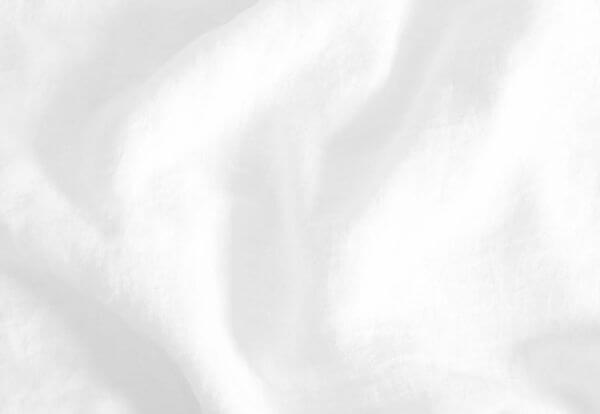 What does each Hardcore Bundle actually come with?

It comes with a lot.

The duvet cover has got these button closures on the bottom there, which I think are pretty cute.

The pillowcases have envelope closures, which is a personal favorite of mine because I think that when you’ve got that extra flap of fabric keeping your pillow tightly tucked away, it makes for an overall neater aesthetic.

Now you know exactly what this bedding is made of.

Let’s take a closer look at which sleepers are going to be most compatible with the Hardcore Bundle.

There’s a lot that I’m liking about this bundle, but just to highlight a few of my favorite features.

First thing I want to talk about is the feel.

Some bedding brands do garment wash or stone wash their linen bedding so much because they’re trying to eliminate that coarseness completely.

While that’s going to work for some sleepers, there are a lot of sleepers for which that distinctly massaging course quality is the basis of appeal for linen.

To those sleepers, I would recommend this sheet set.

I think Brooklinen does a good job of combining that distinctly coarse texture with a soft hand feel.

Something that I personally appreciate about linen and about this sheet set in particular is that it sleeps cool and it’s super breathable, so it’s going to be a great pick for hot sleepers or for the summertime.

Again, linen is thermo-regulating, so if you want to use this year-round, you totally can.

Then there are all the little details that make for a better shopping and sleeping experience.

For example, the pillows have those nice envelope closures, the fitted sheet has labels for the short and long side, the duvet cover has the nice internal loops that make sure your duvet, your middle insert, or your comforter stay in place within the duvet.

Then you’ve got the cute button closures on the bottom.

The whole thing brings a nice aesthetic value to the table.

Something that I like about Brooklinen is that you can customize your linen bundle.

For example, I’ve got two different colors, but it’s up to you what you want to do. You can get two pillowcases in one color, say, white. You can get the other two in a navy color.

You can get your fitted sheet a different color from your top sheet, from your duvet cover. It’s up to you. Feel free to get as creative as you like.

Of course, there are a few things to think about before you make up your mind.

First of all, price.

In general, linen does tend to come at a higher price point than say, cotton, for example, because it typically costs more to make.

That said, the Hardcore Linen Bundle starts at over $400. The truth is, that’s just not going to be in everyone’s budget.

Another thing to think about, speaking of price, is a trial period.

A lot of bedding brands do offer trial periods wherein you can test out a sheet set or some bedding before financially committing.

Unfortunately, no such trial period is offered here.

However, Brooklinen does offer a very generous return policy of 365 days, which is probably the longest return policy I’ve ever heard of.

If you want to know more about the details of the return policy, it’s all laid out on Brooklinen’s website.