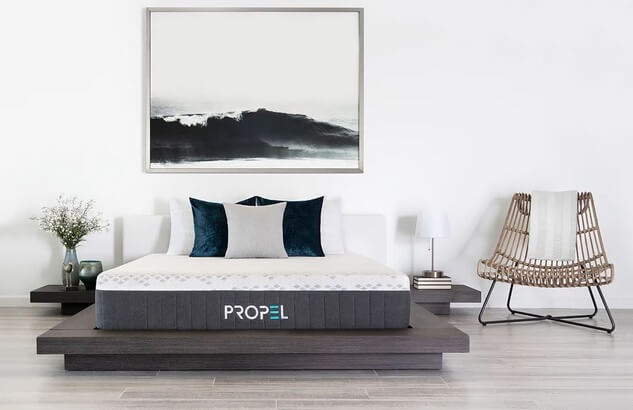 Here I’ll be reviewing the Propel mattress by Brooklyn Bedding. It is the best mattress for sports recovery.

I’m going to go over the support level of the bed, what it’s made of, run some tests and give my pros and cons.

This hybrid mattress is geared towards athletes or those with an active lifestyle. There’s a special material in the cover that’s meant to help recovery and blood flow.

The technology used in the cover and in a top layer have potential health and energizing benefits. so it propel your sleep experience. 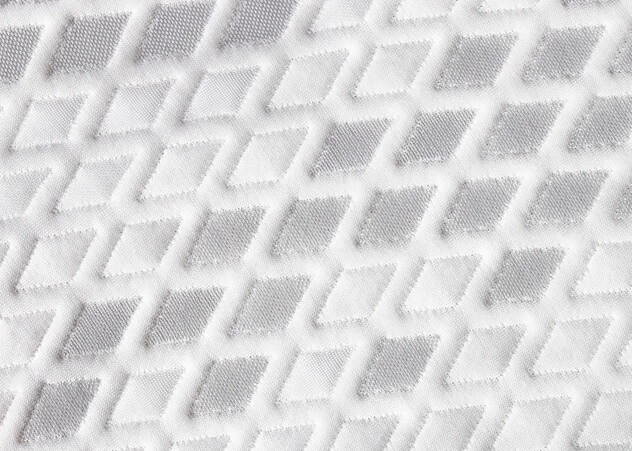 This mattress was designed for athletes and those who need rejuvenating rest to propel them into their next day.

The cover is made with Upcycle technology which, according to the company, uses encapsulated minerals in the cover to transfer your body heat into infrared energy.

Infrared energy has been shown in some studies to increase oxygen levels in the blood, which helps to restore muscles after a long day of training or work.

It said that the infrared rays increase local blood flow without raising blood pressure for a more restorative sleep.

First, let’s talk about what the Propel feels like.

The first thing I like to talk about with a mattress is the support level or feel of it.

With the Propel, I’d give it a 6 out of 10 on a firmness scale, 10 being the firmest. That’s going to put it a hair to the softer side of a medium firmness.

When I’m lying on my back, I can feel myself sinking into the mattress a little bit. It doesn’t have the memory foam comfort layer, so you’re not going to get the contouring, that hug around your body you might be expecting when you sink into a mattress.

We’ll go over the materials a little later on in the review.

You do sink in a little bit while on your back.

When you’re rolling around changing positions, the Propel is really, really bouncy. There’s quick response to pressure from the comfort layer of the foam.

There are also springs in the mattress, so it gives a lot of bounce. You’re able to change positions really easily. You don’t feel stuck when you’re rolling around changing positions, so that’s a big plus for the Propel.

When I roll onto my side, I found that it did a really good job of allowing me to sink in so that my shoulders, my hips, didn’t have any pressure points forming.

That’s really important for the side sleepers out there.

I’ll talk about a pressure map put down on top of the mattress later on in the review so you can get a better understanding what that means in terms of pressure-point formation.

I got to say, I do think the Propel would be a good choice for the side sleepers.

As I roll onto my stomach, it’s the opposite.

Stomach sleepers are going to want to look for a really firm support to keep their hips from sinking into the mattress, to keep the spinal aligned in a good position.

I did feel like my hips were sinking in a bit on the Propel, so if you are a strict stomach sleeper or if you’re a little bit on the heavier side, I don’t think you’re going to find the support level you need on the Propel mattress.

To give you a better idea of what’s going on with the Propel mattress, let’s talk about the materials used and the layers of it.

First up, I do want to talk about the cover.

It’s got this phase-change material in it. Basically what that does is it makes this cool-to-the-touch feeling, so it’s going to help you sleep a bit cooler. That’s really great if you’re someone who tends to overheat during the middle of the night.

Right below that, we have the comfort layer of the mattress. It’s got that softer to medium firm that I was talking about before.

It’s a 1.5” CopperFlex layer, that’s what they call it. It’s a latex alternative, so it got the quick response to pressure.

It also has copper infusions in it. What that does is it helps to draw heat away from the sleeper, helps you sleep a bit cooler. Copper also has antimicrobial properties.

Below that, we have a 2” layer of foam. It’s a transition layer, so it’s a bit firmer than the one on top of it. It’s called Energex foam, again, a latex alternative foam, so it’s pretty breathable. Also has that quick response to pressure.

With these top two layers, what we can tell is that the focus is on cooling and quick response to pressure for a little bit of bounce.

Antother layer is a 1” memory foam layer, it has that slow response to pressure. This far down in the mattress, you’re not going to feel it. It will give you a little bit of extra pressure relief if you’re pushing really far into the mattress, but what it really does is it buffers between these layers on top with that quick response to pressure, and the pocketed coil layer below.

Usually, if the transition layer wasn’t there, it would make it a really bouncy mattress, which would mean it’d have really high motion transfer.

I found that the softer layers and the memory foam did a really good job of dulling the motion transfer on the mattress. That means it’s going to be really good for couples if your partner tends to roll around, change positions, things like that.

Then we have a 6” pocketed-coil layer for support. There are 961 individually encased Ascension coils.

The mattress is a hybrid build, so it’s that combination of foam and coil layers.

At the base, we do have high-density polyfoam. It doesn’t change the feel of the mattress, it’s mostly so the pocketed coils have something to press off of.

Instead of taking my word on the feel of the Propel mattress, I want to give you a more objective look on what’s going on with this bed, so I ran a few tests.

The first one is the pressure map test, I put a pressure map down on top of the mattress, then I laid down in a few positions. The results can be seen next to me, ranging from blue for low pressure to red for high pressure.

Lying down on my back, it’s blue across the board, nothing too interesting there. That’s a good sign, though.

Then rolling onto my side, what I saw was that it was still pretty much blue across the board. There might be a little bit of green here and there, but that’s nothing to be concerned about.

That means that you’re not going to feel as jammed up at your shoulders. It’s giving you enough space to sink into the mattress before you bump up against any firmer support layers.

Like I said, I do find that the Propel is a hair to the softer side of a medium firmness, so if you are a side sleeper, combo side-back sleeper, you’re going to be pretty happy with the Propel.

Rolling onto my stomach, it did show blue across the board again, but that’s because my weight was pretty evenly distributed. I’m not too surprised by that result.

However, I do still felt my hips sinking into the mattress. If you are a strict stomach sleeper, I’d be careful on the Propel. Your back’s going to end up bowing a little during the middle of the night.

Another test that I ran was the bounce test to see if you’re going to feel stuck in the mattress, and I was pretty impressed with the level of bounce on the Propel mattress.

There’s a quick response to pressure from the Energex foam and the TitanFlex foam on the top of the Propel mattress as well as the pocketed coils.

You’re not going to feel stuck as you’re rolling around, changing positions. That’s really nice for combo sleepers out there.

Something to go along with the bounce test is my third test, which was the motion-transfer portion of the review.

Basically, what I do there is I put a seismometer down on one side of the mattress where you might be sleeping, and on the other side of the mattress, where if you share your mattress, where your partner might be sleeping, I dropped a 10-pound steel ball from heights of 4, 8 and 12 inches, simulating someone getting into and out of bed, rolling around in the middle of the night.

The seismometer tracks the disturbance transferred across the mattress with each of those drops.

I got to say, I was really impressed with the Propel’s ability to isolate that motion transfer. Usually with bouncy mattresses, you see really high spikes of motion. However, with the Propel, it stays pretty low. It isolates the motion really well.

That means if your partner rolls around in the middle of the night, adjusts their position quite a bit, you probably won’t feel that on your side of the mattress. That’s a big plus for the couples.

Before I end the review, I do want to give you some pros and cons for the Propel mattress.

First of, reasons I would recommend it to you is that it sleeps really cool. It’s got that phase-change material in the cover, so it’s got a cool-to-the-touch feeling.

The foams that are directly underneath it, the comfort and transition layer, do a good a job of dispersing that body heat to help you sleep a bit cooler. Also, the hybrid nature of the mattress does help it sleep a little bit cooler because of the breathability.

Overall, I found that the Propel did a great job of sleeping cool through the night.

The second reason I would recommend it to you is if you are a side-combo sleeper, a combo sleeper in general. It has that softer, medium firmness to it.

When I was lying on my side, according to the pressure map, there weren’t any specific pressure points in that position.

Also, the great bounce means you can roll around, change your position, without feeling stuck in the mattress.

Finally, I would recommend it to the couples out there. I was really impressed with its ability to isolate motion transfer, especially for a bouncy mattress such as this one.

If you do share your bed with someone who changes position during the middle of the night quite a bit, you should feel OK and be able to rest through the night on your side of the mattress.

Some of my cons, reasons you shouldn’t buy this mattress, is if you are a strict stomach sleeper.

Again, I felt my hips sinking into the mattress a little bit, and that’s something you really want to be careful of if you’re sleeping on your stomach because your back will bow, you will wake up with some aches and pains in that area.

Also, I would be careful for the heavy folks. If you are 250, 300 pounds, you’re not going to get the support level you need out of the Propel mattress.

If you are interested in purchasing a Propel mattress, I want to give some basic information on that process.

First up, there is a 120-night trial period, so you can have it in your home for about four months, deciding whether you’re going keep it or send it back.

There is a 10-year warranty. That’s the standard online bed-in-a-box warranty.

Shipping is for free, and it will ship compressed in a box.

That’s it for my review of the Propel, the best mattress for sports recovery.