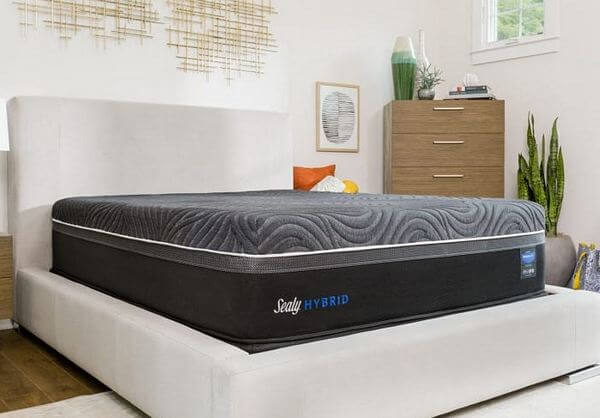 Premium being the most expensive.

I’m going to put this mattress through a few tests and get some general recommendations at the end of the review.

I’m going to start out the review talking about the construction of the mattress. I’ll begin with the cover.

The cover is a knit cover. It’s made with Sealy’s ChillTech technology.

It’s meant to make you feel cooler during the middle of the night, help make sure you don’t overheat.

It is actually pretty cool to the touch. It’s also pretty stretchy.

You won’t have to worry about it bunching up when you’re rolling around changing positions. It does have a little bit of a thickness to it, which gives it this inherent softness and coziness to it.

Let’s get a look underneath the mattress at the layers of the Sealy Premium Firm Hybrid Cooling mattress.

Let’s talk about the layers of the mattress.

I should point out that this mattress does come in two different firmness levels: plush and firm.

Here I’m reviewing the firm version of the mattress.

On top, we have the comfort layer, which is a memory foam. It’s about 4 inches thick. It is a thicker layer of memory foam than on the Essentials version of this mattress. Also, it’s a really dense memory foam.

It has a slow response to pressure. As you’re sinking in, you’re really going to feel that contouring, that hug around your body.

A lot of times, memory foams can be known to trap a lot of body heat. People can complain that it is making them overheat during the middle of the night, but they’ve actually had a gel infusion. It’s made with chill according to Sealy.

That is going to help draw heat away from the sleeper, help them sleep cooler during the night.

Below that comfort layer of memory foam, we have a pocketed coil system.

This is a Posturepedic zoned, pocketed coil system.

There’s actually more coils which is going to help to support the heavier portion of your body, your hips and things like that, to help with spine alignment.

Around the edge of the mattress is an edge support coil system. Smaller coils also individually wrapped that go around the entirety of the Sealy Hybrid Premium mattress which is going to allow you to sleep a little further towards the sides.

When you get closer to the edge, it’s not going to collapse aside. You can use more of the mattress. 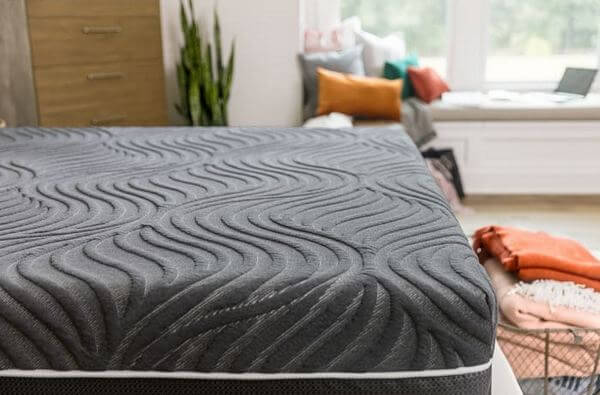 Now we’ve seen what makes up the Sealy Hybrid Premium mattress. It’s time to get an idea for the feel and firmness of it.

I’m going to start by pressing into the cover.

The first thing I feel is that comfort layer of memory foam. Really soft, allows me sinking pretty easily and feel it contouring around my hand.

As I lie down on my back, my weight is pretty evenly distributed. Even so, I do feel myself sinking into the mattress, filling in the space with my lower back, which is nice for back sleepers.

As I change positions and roll around, because of that slow response to pressure from the memory foam, I definitely feel like I’m a little more stuck in the mattress.

If you’re a combo sleeper and if you like feeling a little bit more on top of the bed, that might be an issue for you.

I get a little closer to the side to check out the edge support on the mattress.

Support is something that can be really important if you sleep with a partner. If you need to use the entire surface area of the bed, you don’t want it to collapse on the side and make it feel like you’re going to roll out of bed or anything like that.

We did talk before during the construction portion about the edge support coils, which are all the way around the sides of this mattress.

I can tell you that they are holding up really well.

I’m going to roll on my side, test it up for side sleepers.

Side sleepers, in general, do tend to prefer softer mattresses. Something that you can sink into because you are on your side, you’re concentrating all that weight on a smaller surface area.

It pushes you further into the mattress. You tend to interact more with the support portions of a mattress. Those firmer portions which can cause issues with pressure at the shoulders and the hips.

We are going to take a closer look at pressure later on in the review.

I did just want to say that even though this is the firm version of the Sealy Premium mattress, I do feel that it is pretty soft.

It’s that thick layer of memory foam on top that allows me to sink in for pressure relief. I do think that this is a great mattress for side sleepers.

I’m going to roll on my stomach.

Stomach sleepers tend to be the opposite of side sleepers. They like firmer mattresses. Your hips tend to be the heavier portion of your body. They push them in the mattress.

A firmer mattress will help you keep your hips up, keep your spine aligned in a good position.

Like I said, even though this is the firm version of the Sealy Premium mattress, I do feel that it’s a bit on the softer side.

I can feel my hips sinking in which over time can cause some issues with a pain in the back. Some aches there.

The firmness of the mattress is an opinion because of different sizes and weight distribution. 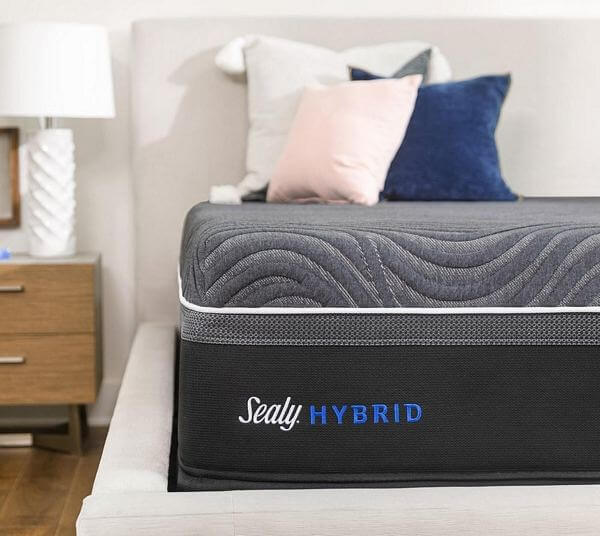 Just to give you an idea of the bounce of the Sealy Hybrid Premium, I have this 10-pound steel ball and I’m dropping it. I can see, there’s really not much bounce on this mattress.

That’s thanks to the thick memory foam comfort layer that does a good job of dimming that.

It’s not that quick response to pressure you might expect out of a lot of innerspring or hybrid mattresses.

The thick dense memory foam on top does a good job of dampening that.

Basically, I’m going to drop the same ball from heights of 4, 8 and 12 inches, which is going to simulate someone getting into and out of bed or rolling around in the middle of the night.

On the other side of the mattress, I have a seismometer, which measures the disturbance
as transferred with each of those drops.

I can see this is really a good performance on the motion transfer tests, in my opinion. The thick memory foam, the pocketed coils, which are individually wrapped, do a good job of isolating motion transfer.

If you do sleep with a partner or someone that rolls around in the middle of the night on the other side of the bed or gets into and out of bed, go to the bathroom or something like that, you shouldn’t be disturbed by their movement. 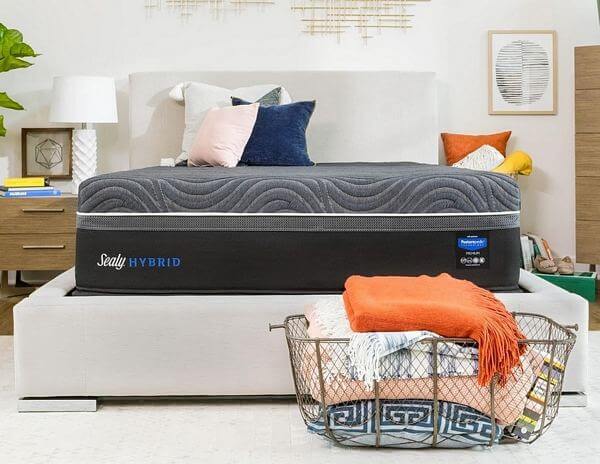 A lot of people buying a mattress are going to want to know if they’re going to feel like they’re sitting on top of or sinking into bed.

To test this on the Sealy Premium Hybrid cooling mattress, I have a sinkage test in which I use four balls of varying sizes, weights and densities, simulate different body parts and try to see how far into the mattress they go.

This six-pound medicine ball. It’s filled with sand and it simulates a lighter body part. I found that it sinks in about an inch-and-a-half.

Next step, I have the 10-pound steel ball, the densest ball I use during this test, and it sinks into the mattress about two-and-a-half inches.

After that, I had the 50-pound medicine ball. It’s filled with sand. It simulates a heavier portion of your body, think of your shoulders, your hips. It sinks into the mattress about four inches.

Finally, the 100-pound medicine ball. Again, filled with sand. If you’re a bit heavier so it’s that center of your body.

I found that it sinks into the mattress about six inches.

When compared to other mattresses that I’ve tested, the 6 and the 10-pound steel ball definitely have more sinkage than what I’m used to seeing on the mattress.

Whereas the 50 and 100-pound medicine ball is about on average compared to other mattresses on the market.

I credit this to the fact that with the 6 and 10-pound steel ball, you are sinking into that dense memory foams. You’re going to get that sinking in feeling, the contouring around your body.

With the 50 and 100-pound medicine ball, you’re pushing through that and starting to get that support from the pocketed coil system.

Even with the average sinkage for the 50 and 100-pound medicine balls, because of that slow response to pressure, you’re definitely going to feel more in the mattress.

You’re going to have definitely a little bit more energy needed to change positions, which could be a problem for combo sleepers.

Just to give you some basic information about the Sealy Premium Hybrid Mattress. Sealy doesn’t sell this mattress directly to consumers, but it is available at places like Overstock.

Sears offers a 100-day trial period. You just have to try it for 30 days first.

They also offer free shipping on all mattresses.

There’s also a 10-year warranty on this mattress.

It is available in several sizes, including twin, full, queen, king and California king.

Some of the reasons I really like the Sealy Premium Hybrid Cooling mattress is that it’s great for side sleepers.

That thick memory foam comfort layer really allows you to sink in for pressure relief, which is great for side sleepers who often have issues with pressure at the shoulders and hips.

I’d also recommend this mattress to couples. It’s great performance on the motion transfer portion of the review.

Also, I’ve found that this has great edge support. I was really impressed with that, thanks to the edge support coils that wrapped around it the entirety of the support system of this mattress.

Finally, I would recommend this mattress for those that are looking for a memory foam feel but want to sleep cool. The memory foam can at times be known for trapping a lot of body heat.

There are a lot of portions of the construction of this mattress, in the cover, the special memory foam use and also the pocketed coils, creating airspace for air flow through the mattress.

All those things work together to create a cooler mattress.

Some of the reasons I would say that maybe the Sealy Premium isn’t for you is if you’re a stomach sleeper.

In my opinion, even the firm version of this mattress is on the softer side, so you are going to have your hips sinking in, which over time can cause some aches in the lower back.

Also, I would say, if you’re a combo sleeper, you might want to be careful with this mattress because you’re sinking in.

That slow response to pressure from the memory foam mattress might feel a little bit stuck in it when you’re rolling around.

What is The Best Mattress For Snoring? Here Are 4 Options!