I’ll go over the support level of mattress, what it’s made of, run some tests and finally, at the end of the review, give my pros and cons.

When talking about the feel of the Plank, it’s important to note that this product was designed specifically for those that are looking for a really firm mattress.

It is technically a flippable mattress with one side being designed to be firm and the other side is extra firm. Regardless of which side you have up, you’re going to get strong support to help keep your hips from sinking too far into the mattress.

We rate mattress firmness on a scale of one to ten, with ten being the firmest.

I’m going to give the extra firm side an 8.5 out of 10! That’s one of the firmer foam mattresses that I’ve tested.

When I’m lying on your back, when my weight is evenly distributed, I definitely feel more on top of the mattress. I don’t sink into the mattress at all. My hips are right in line with the rest of my back.

If you are a strict back sleeper and you want that firm support, you don’t want to feel like you’re sinking into the mattress at all, the Plank is going to be a good choice for you there.

Because I am feeling on top of the mattress, I’m able to roll around, change positions. There’s good mobility on the Plank.

There is some decent bounce to the mattress, which I was happy with. A lot of foam mattresses can give you that trapped-in-the-layers feeling, but that’s definitely not the case with the Plank.

I rolled onto my side. This is where the Plank might not be the best choice for you.

Side sleepers tend to prefer softer mattresses so you can sink in for pressure relief. There’s no sinking into the Plank at all.

It’s a really firm mattress, so I would say it’s probably not the best bed for side sleepers. We’re going to take a closer look at pressure later on in the review, but I got to say I did feel a little bit jammed up when I rolled onto my side, so probably better to look at one of Brooklyn Bedding’s other softer mattress options if you are a side sleeper.

Rolling onto my stomach, this is where the Plank shines. Stomach sleepers tend to need firm support to keep their hips from sinking into the mattress because it’ll bow their back.

With the strong support of the Plank, I’ve found that it did a great job of keeping my hips and spine aligned in a good position. That’s something that a lot of foam mattresses cannot provide for stomach sleepers.

So back sleepers and stomach sleepers are going to find the firm support of the Plank to be good for their spinal alignment. Side sleepers are probably going to want to look for something a little bit softer. 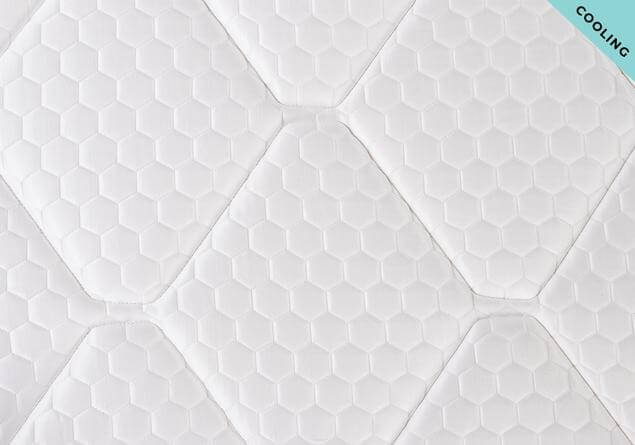 To give you a better idea of what the Plank is all about, let’s talk about the material that was used and the layers of it.

First, the cover of the mattress uses a phase change material. It’s got this cool-to-the-touch feeling. It’s going to help you sleep a little bit cooler if you overheat during the night.

Something that I do want to point out though is the phase change material does give the cover a slick feeling, which some people say they don’t like the way it interacts with their sheets, glides over. That might be one of my complaints or cons with the mattress.
We’ll go over that a little bit later on.

I should also point out that the cover of the Plank is quilted with a little bit of softer foam, so you do get a little bit of pressure relief and comfort right on top of the mattress before you go into the firm, high-density poly-foam support.

The Plank is a flippable mattress. I have it set up so that the extra firm side of the mattress is up, so you’re not going to transition from that soft quilted cover into anything that’s going to cradle and support. You’re going to go right into that firm, high-density poly foam.

This 7” high density poly foam is a layer that’s used in a lot of bed-in-a-box mattresses for a support layer. It’s really firm, it’s got that quick response to pressure.

This is a unique design for the Plank to give it that extra firm feel.

Below the high-density poly foam is two inches of their TitanFlex foam. If you’re flipping this over, this is going to give it more of a 7.5 out of 10 firmness, so still a supportive mattress but a little bit softer.

It also has a quick response to pressure. You’re not going to have to worry about feeling stuck even when the Plank is in that normal firmness level arrangement if you flip the mattress over. That is going to give you a little bit more pressure relief, a little more sinkage into the mattress, you’ll still going to be able to change positions.

TitanFlex is known as a latex alternative. It’s going to help draw heat away from the sleeper and help you sleep a little bit cooler.

Then on the bottom, the cover is the same as the cover on the top of the mattress. It’s that same phase change material quilted with a little bit of foam. You do get a little bit of pressure relief out of that as well.

Instead of just taking my word on what the Plank feels like, I ran a few tests to give you a more objective view of what’s going on with the mattress.

The first one I ran is a pressure map test.

I lied a pressure map down on top of the mattress, lied down in a few positions. The results range from blue for low pressure to red for high pressure.

Lying on my back, my weight’s evenly distributed. It’s blue across the board. That’s pretty much what I expect out of most foam mattresses. It’s just good to see that the Plank is performing up to the standard there.

Rolling onto my side is where it gets really interesting. Some mattresses will have more blue to show low pressure. If it’s a softer mattress, I’ll be able to sink further into the mattress.

With the Plank, it did go into the green range mostly across the board. That’s not terrible, but I think over the night, I would start to feel pressure points forming at the shoulders and the hips.

There is a quilted cover on the Plank. It’s not actually like sleeping on a plank of wood, but I do think that most people, especially those who have broader shoulders or spend entire night on their side, you’re going to want to look for something a little bit softer so you can sink further into the mattress without worrying about bumping up against firmer layers.

Rolling onto my stomach, like I said, stomach sleepers tend to love firm support so their back doesn’t get bowed out of the alignment. It is blue across the board for the stomach sleepers.

I also do want to point out that, just in general, I felt like it did a great job for stomach sleepers, keeping my spine aligned in a good position.

Another test that I ran is the bounce test.

I was impressed with the bounce on the Plank mattress. Some all-foam mattresses that don’t have pocketed coils or steel coils can give you a little bit of a trapped feeling in the mattress, but I felt more on top of the Plank than in it.

I was able to roll around, change positions easily without fighting any of the foam layers.

The last test that I’m going to talk about that goes hand in hand with that bounce test, it’s a motion transfer test.

I took a 10-pound steel ball and dropped it from heights of 4, 8, and 12 inches to simulate someone getting in and out of bed, rolling around in the middle of the night. This is important if you share the mattress.

I put the seismometer down on the other side where you might be sleeping. I tested how much disturbance is transferred across the bed with each of those drops.

I was actually really impressed with the results of the motion transfer test for the Plank. Because it is a firmer mattress with some decent bounce to it, I was expecting to be higher spikes of disturbance transferred with each of the drops, but it kept a low disturbance, a really low motion transfer across the mattress with each drop, which means it’s probably a good choice for the couples if both you and your partner like a firmer mattress.

There is a little bit of foam quilted into the cover of the Plank, which is cutting down on the disturbance transferred across the bed. I got to say really impressed with the ability of the Plank to isolate motion transfer.

Before I finish up the review, I do want to give you some of my pros and cons.

First up, my recommendations on why I think the Plank is a good mattress for you is if you are a stomach sleeper.

Stomach sleepers do tend to have a hard time finding a supportive enough mattress to keep their spine aligned in a good position.

The Plank has an 8.5 out of 10 firmness, so a really firm, all-foam mattress to help with spinal alignment while you’re sleeping on your stomach.

I also like it because it sleeps cool. It’s got that phase change material in the cover, which has that cool-to-the-touch feeling. Also, the Titanflex foam in the mattress does a good job of drawing heat away from the sleeper so you won’t overheat during the night.

Finally, I think it’s a good choice for the couples out there, especially if the couples are looking for a firmer mattress. It did really well on the motion transfer portion of the review. I didn’t see that high spikes in disturbance transferred across the bed with each of those drops.

Also, I thought it did pretty well on the edge support portion where you can sleep all the way to the end of the bed without worrying about collapsing the side of the mattress, rolling out of the bed in the middle of the night.

Some of my complaints or cons for the Plank mattress, reasons I don’t think it would be for you is if you are a side sleeper.

Generally, side sleepers just like softer mattresses. You can sink further in for pressure relief so you don’t get jammed up in the shoulders.

The Plank is specifically designed to have a firm feel. In general, you’re going to want to look for something a little bit softer.

Check out Brooklyn Bedding’s other mattresses, like the Aurora, for a softer feel if you want to sink a little bit deeper into the mattress.

Also, one complaint that I’ve heard with phase change material covers is while they do sleep cool, they have this slick feeling to it. Sometimes, people don’t like the way their sheets glide over the cover of the mattress. That slick feeling would be one of my complaints.

If you are interested in purchasing a Plank mattress, I’m going to give you a little basic purchasing information.

First up, there is a 120-night trial period. You can have it in your home for about four months, deciding whether you want to keep it or send it back.

There is a 10-year warranty which, I would say, is a pretty standard bed-in-the-box warranty for all-foam mattresses.

It does ship for free. It will arrive compressed in a box.

That’s it for my review of the Brooklyn Bedding’s Plank mattress, the best extra firm mattress.