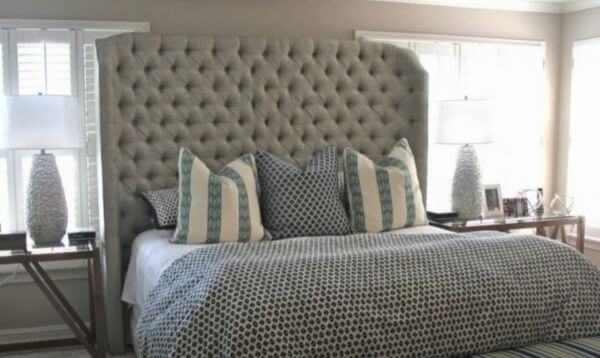 In this article I am sharing 10 things you should stop doing to your bedroom. These are probably the worst bedroom design mistakes.

The first thing you need to stop doing to your bedroom is painting a random accent wall.

I don’t know who invented this idea, but you were tricked into thinking that you needed a pop of color in your bedroom. So you ran to Lowe’s, grabbed a bucket of green paint, you threw it up on the walls and you were like ‘oh I have a pop of color in my bedroom’.

There is nothing worse than an accent color in a bedroom, where it just feels super disjointed.

If you love color and you’re gonna do an accent wall in your bedroom, go for it, don’t just stop at the wall. Get some green textiles, green accessories and don’t just get the exact shade of green.

You want to get a variety of different tones. That way it blends seamlessly.

Since we’re talking about color the next thing you should stop doing to your bedroom is using the color red. 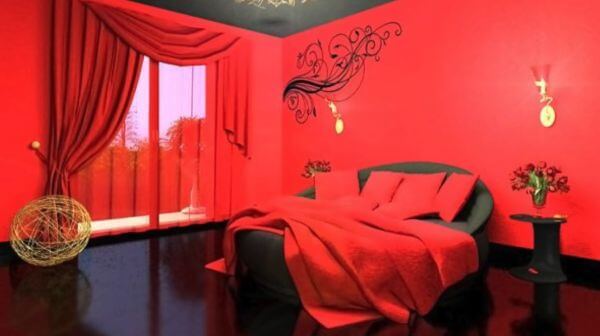 Unless you want your bedroom to look like a brothel, red is not gonna be the color to put in your bedroom.

Anytime I see red sheets, red pillows, red curtains, those are the worst. When I see the red room, I think of 50 Shades of Grey and you’re doing some nasty stuff in your bedroom.

We don’t want to see that.

I actually don’t have an alternate solution to this color. I just feel red does not belong in a bedroom, because you’re just sending the wrong message.

Do you really want to tell everybody your bedroom business? I didn’t think so!

The next thing you need to stop doing to your bedroom is getting carried away with all the tufting.

If you’re thinking like ‘I love tufting and I have to have it in every single corner of my bedroom’, I’m telling you right now to cut it out.

You like the luxurious look of tufted headboards, tufted ottomans, etc.

Just pick one or two. If you get the entire thing tufted, it just looks bad.

Not only that, but I feel when you get everything tufted, it can look really outdated.

This leads us to my next tip which is to stop buying bedroom furniture sets.

I know your mom or dad probably used to shop this way. You went to Ashley Homestore or you went to Z Gallerie and you saw a bedroom set up and you were tricked by the salesperson to buy the entire set.

I just think it’s so lazy.

In this modern age there’s really no point into buying a whole collection because there’s so much more beautiful items from other stores, other boutiques that you can introduce into your space that matches your personality and your interior design style.

When you’re buying your bedroom furniture, mix and match your pieces and play with different elements like wood, metal, maybe even marble.

Having a room that looks like you just got it from a store catalog is not really a home.

The next thing you should stop doing to your bedroom is buying a headboard that’s way too high.

If you have eight or ten foot ceilings, a standard ceiling, you don’t need a headboard that reaches up to the sky.

It just looks so awkward. I don’t even know who tricked you into buying this headboard because they should be sent to jail. You wasted your money because this is an eyesore.

Headboards don’t need to be that high. I don’t care if your ceilings are 20 feet tall. You can put some art up there, you could do a beautiful gallery wall.

If you’re looking for a headboard for your bed, just go for something that’s timeless, classic, that’s not too high, not too low.

The next thing you should stop doing to your bedroom is having too many patterns.

When you’re introducing pattern to a space it really takes a very specific eye to make sure that those patterns are working cohesively.

It’s really easy to mess up a room when you introduce pattern and you don’t know what you’re doing.

But if you really want to get into some pattern play, let me give you the secret on how to mix patterns like a pro.

You want to start with your large print first. Let’s say you have a little bit of a larger scale floral print and you want to introduce another print. Let’s say with the pillow.

Pick a print that’s a micro size for the pillow and make sure that it is in the same color palette. That way it almost gives the illusion that it’s just part of one big print. 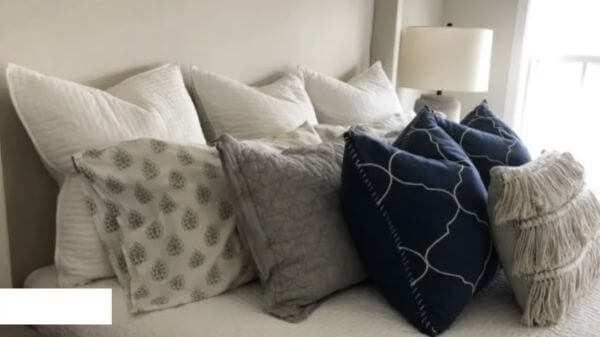 The next thing you need to stop doing to your bedroom is having a cluttered bed.

I’ve been guilty of this. I have a bunch of throw pillows, I want to put all of them in the bedroom and it’s just not it.

It looks great in photos and it looks cozy, but when you’re making your bed in the morning, it is a chore. It just doesn’t look right.

If you have a king bed you can play with larger pillows. But if you have anything smaller, make sure your pillows are also going down in size.

When you put your rows of pillows, make sure it is also descending inside. That way you’re creating depth and it feels intentional and it doesn’t look cluttered.

We want to make it look like you know what you’re doing, like you are the interior designer of your own home.

The next thing you should stop doing to your bedroom is forgetting to add volume for your bed.

When your bed is so flat, it looks like you are staying at a hostel.

Nothing says cheap bedroom like a flat bed. You want to add these voluminous textiles through your duvet, your comforter, maybe throw a blanket on top to add a little bit more texture.

Nothing says comfort like a yummy comforter and duvet.

The next thing you should stop doing to your bedroom is forgetting to add a designated area where you can sit on.

Having an additional seating area in your bedroom not only gives you the convenience of dropping your bag down at the end of the day or maybe you’re sitting down and reading a book, having a cocktail, having your morning coffee, it just elevates the experience.

The last thing you should stop doing to your bedroom is getting floating nightstands.

These remind me of a really sketchy hotel where they cut corners and instead of getting a piece of furniture, they got a piece of plywood, stuck it next to the bed, painted it purple and called it a day.

It’s gonna look like you went the budget route and not in a good way.

Also when you do a floating nightstand, what if you want to update your bed or get a new one and it doesn’t fit anymore, because your nightstands are in the way, they are stuck on the wall.

With traditional nightstands you can move it out of the way, you can inject a little bit of personality with the design. Not only that, it’s practical and it can hold things.

Back to Bedroom Essentials