If you’re looking to get a new mattress and you can’t decide between the Bear and the Layla, you’ve come to the right place.

I’ll be telling you what the similarities are between these two mattresses, the differences, go over the construction differences, and let you know who should get one over the other.

What’s similar about these two mattresses?

What’s different between these two mattresses?

Let’s talk about the construction of each mattress and what the differences are.

Starting with the cover, both are nice, soft covers with nice texture to them.

There’s actually Thermogel infused into the Layla, which means that it’s cool to the touch, which helps with cooling. The Bear has Celliant fibers woven into it, which credible studies show can actually bring you certain health benefits and actually give you a cooler night of sleep.

Moving on to the mattress now, on the soft side of the Layla, there are three inches of memory foam, a transition layer, then a base layer, and then an inch of memory foam which represents the firm side.

You get one inch of graphite-gel memory foam in the Bear. Then you get, basically, two layers that act as a transition layer – they’re latex like – and then a base layer.

The base layer of both are pretty similar but really just how much memory foam you get is going to be the key difference here.

With three inches of memory foam and then a transition layer, you get quite a bit of comfort material. That means it’s probably better on your side. It’s going to relieve pressure very well.

It was a little bit faster to recover the normal memory foam, so you don’t quite get that getting-stuck feel. You’ll definitely sleep in the Layla versus sleeping on the Bear. You’re going to get good pressure relief with both.

But just understand, whether you like the memory foam feel or you don’t. If you do, you definitely get that more with Layla. If you like sleeping more on your mattress, rather than in your mattress, then potentially Bear could be the right choice for you.

As far as breathability is concerned, I would say Bear probably has a slight advantage, in that you have the Celliant cover, you have this graphite-gel-infused memory foam. I think that breathability probably would be a little bit of an advantage.

Overall, the feel differences will come down to whether you really like that memory foam feel and then there’s firmness differences as well.

Let’s talk about differences in firmness and feel.

I think most would agree on the soft side, Layla is simply softer than the Bear is – that’s just something to note.

As far as feel is concerned, it really comes down to how much memory foam you get. With the Bear, you just get one inch on top. With the Layla, you get three inches on the soft side, so you’re going to really sink in, get that slow moving memory foam feel with the Layla versus the Bear – you get more of a balanced foam feel. 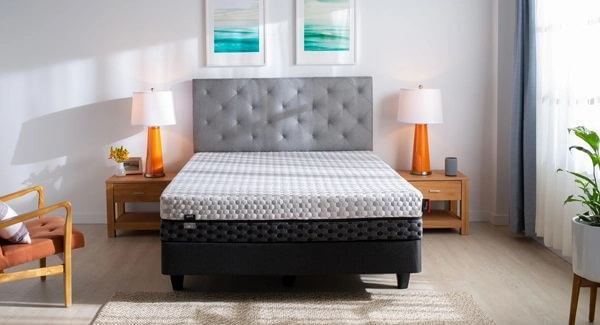 Now I’m going to talk through how I feel in different sleeping positions on each mattress.

Starting on my back on the Layla’s soft side. I feel like it’s pretty good match for me, the foam conforms to the curves of my body pretty well, maybe a touch soft. On the firm side, it’s maybe a touch firm.

I would probably say I enjoyed the Bear a little bit better. It’s 6.5 out of 10 firmness, kind of in that medium firmness range. It was just a good support match for me while on my back.

Switching onto my side, I think the Layla really shines here. That memory foam on the soft side really just kind of melts that pressure away.

Bear is still pretty good. I liked it on my side, as well, but I would probably say I prefer the Layla’s soft side.

As far as stomach sleeping is concerned, I think the Bear is a little bit too soft. If you just sleep on your stomach, the firm side of Layla can be a good choice for you. I know it was for me.

I’ve given you the construction differences in my subjective opinion on firmness and feel. Now, I want to give you an objective test such as exactly how well each mattress relieves pressure.

I do a pressure map test. I get down my back, side, and stomach. What’s really important is the side-sleeping results.

The results are very similar. I found both to be pretty good match on my side as far as pressure relief is concerned. Layla wins by just a slight bit, which makes sense given that it’s softer. It has more memory foam so it’ll kind of melt that pressure away.

Both are good matches on your side. I would probably say Layla has a slight advantage.

To test how a heavier person would feel on these beds, I called my friend who is 230.

For sleeping positions, on the Bear, lying on his back, he felt good overall support.

On his side, he felt little bit of pressure on his shoulders and his hips.

On his stomach, he was definitely bowing in at the hips and getting out of alignment.

On his stomach, he was definitely bowing on the hips there as well.

Who should pick one over the other?

If you sleep with a partner, there’s two additional things you may want to consider when looking at a mattress.

Motion transfer is basically, if your partner is moving on one side of the bed, is that motion be isolated or is going to transfer over to you and possibly bother you at night?

Edge support is, basically, can you sit on the edge of the bed.

Can you sleep towards the edge of the bed without feeling like you’re going to fall off?

In this particular case, I would give the motion transfer advantage to Layla just because it has so much more memory foam, which does a really good job at isolating motion.

As far as edge support is concerned, I would give the slight advantage to Layla. It seemed to do a little bit better of a job as far as not having that falling-off-the-bed feeling.

Which One Should You Get?

As far as who should get the Bear, if you’re looking for medium firmness – it’s really what you get with the Bear – I put it about 6.5 out of 10, right about average. I think it’s a better fit for back sleepers than the Layla is.

If you are a combination sleeper, just given that it’s a medium firmness, it’s pretty good in all three positions.

If you want to sleep on your mattress rather than sinking into the mattress, or sleeping in the mattress, the Bear is probably the better fit there.

As far as who should get the Layla, if you just sleep on your side, the soft side is really great with that – it’s a 5.5 out of 10, it’s a little bit softer. That memory foam just melts that pressure away.

If you’re just a stomach sleeper, the firm side is actually a very good match there, as well.

If you’re looking for a memory foam mattress, you like slowly sinking into your mattress, the Layla is probably going to be the better choice for you.

Hopefully, I’ve given you good overview of what the similarities and differences are between these two mattresses.