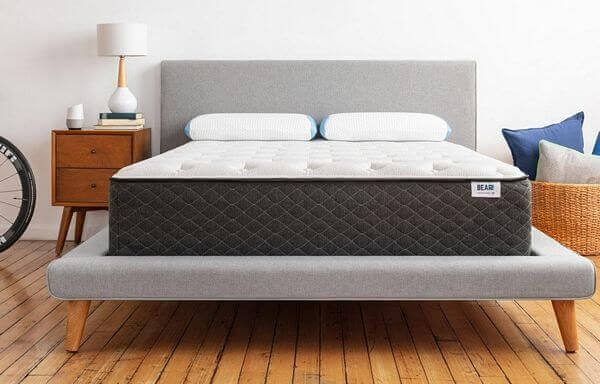 Here I bring you another mattress review to make your dreams come true.

I’m looking at the Bear Hybrid mattress and I’m going to go over details like its construction, its firmness, its feel, all to figure out if this is the right fit for you.

Like any good investment, we need to know what the construction is of this mattress. What’s inside can really help you figure out how you’re gonna sleep on it.

It’s not all about the external beauty, my friends, what’s inside matters!

Starting with the top cover, it has Celliant woven into it, which Bear says can help with muscle recovery.

It’s soft and cool to the touch and it has a cool design on it too.

Then we have the comfort layer, which is a soft cooling gel foam. It’s pretty responsive, more so than your typical memory foam. And it is pretty cool to touch.

And then below that is a transition foam and that’s really just meant to help transition from the top foam down to the coils.

Then we have our support layer, which are individually wrapped coils. They’re quite durable and they have space in there, which allows for air flow and breathability. This is great if you’re a hot sleeper.

And then all of this sits on top of some support foam.

Can you flip Bear Hybrid? Short answer is no.

The way it’s designed is it has the coils on bottom and the foam on top, so if you flip it you’re going to be sleeping on coils and I don’t think anyone wants that.

But if you do want to extend the life of the mattress, you can rotate it every 90 days or so.

I like to rate mattress firmness on a scale of one to ten.

The standard for medium firmness is a six and a half.

Testing out the Bear Hybrid, I would give it a six, so it’s a little softer than average.

When it comes to the responsiveness, it actually has some pretty good bounce to it, even though it has that memory foam inside of it.

This is a good sign if you’re someone who likes to move around in the night or change sleeping positions, that you’re not going to get stuck in the mattress.

The way you like to sleep will determine how a mattress is actually going to work out for you.

I’ll start with side sleepers.

When I lay on this mattress, I feel pretty good, I don’t feel much pressure points on my hip or my shoulder, so it could be a good option for you.

Now back sleepers, you’re pretty easy to please. You’re like a kid with a toy or a dog with a bone.

You’re just looking for support and especially around your hips. You don’t want them to sink in because that could cause them back pain down the road.

When I lay on this mattress, i felt support. I did not feel like my hips were sinking in and just felt the support overall.

Stomach sleepers, you guys are looking for something firm. You don’t want your hips to go into the mattress because that could cause some back problems down the road.

When i lay on my stomach on the Bear Hybrid I just don’t feel that level of support and firmness that I need.

Remember it is a little softer than average so I would go with a different option if you are a stomach sleeper.

A lot of these tests can be a little subjective so to make it more objective I have the pressure map test.

It’s a map that I roll out on the mattress and then I lay on it in different positions. I can pull up a color code that shows high pressure or red points, blue or low pressure points. So red is bad, blue is good.

When it comes to my results of me laying on my side, there was some red on my hip and also on my shoulders. What that shows me was that there are some pressure points in those areas. If you have sensitive joints, you might want to avoid this mattress.

What the image of me on my back showed? There was no red or orange, which shows that there wasn’t any pressure, which makes sense for how I felt. I felt supported when I was laying on my back on this mattress. 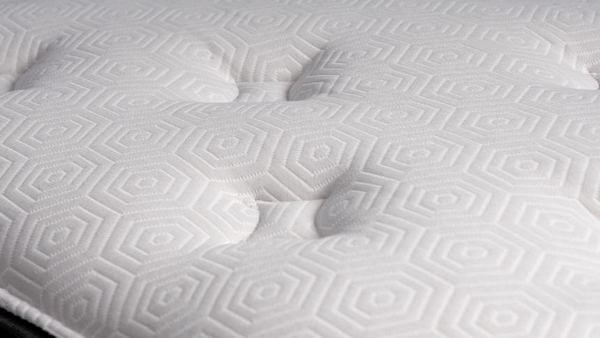 Motion transfer is important because it shows how movement will carry across the mattress. This can be good to know if you share the bed with a spouse.

If you wake up in the middle of the night, and you don’t want to wake them.

In order to test the motion transfer, I used a glass of water. I pushed on the mattress to see how the water moves. It was moving a good amount, which shows that if you were to wake up, you could wake up your partner.

So if you’re looking for something with less motion transfer, I would recommend a memory foam mattress.

Now let’s look at edge support, which is good if you like to use the full surface of the mattress, whether you’re sleeping on the edge of it, or if you share the bed with someone, such as a spouse or an animal.

I tested it out by sitting on the edge. I didn’t feel like I’m trying to fall off, it feels pretty good.

I tested it further by laying down. I also felt pretty good. I was rolling a little bit, moving towards the edge, and I didn’t feel like I’m about to fall off, so I would say it has pretty good edge support. 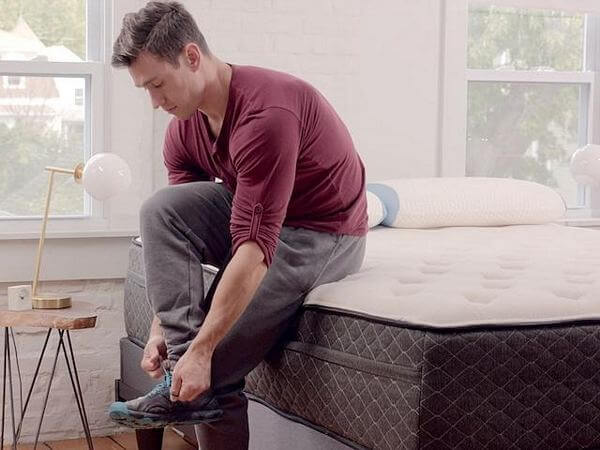 I think the Bear Hybrid would be a great mattress for back sleepers.

When i laid on my back, I felt like I was supported and iIdid not feel like my hips were sinking in.

Second, if you’re looking for a responsive mattress, this could be a good fit for you. The coils and the responsive foam inside make it so. If you change positions, you like to move from one to another, it’s not too much of a struggle.

When I laid on it and I moved around, I didn’t feel like i was sinking in.

And last but not least, the price. The Bear Hybrid is a pretty reasonably priced hybrid mattress. You can find it online for less than $1300 in a queen size with some sales.

This is not the best option if you’re a stomach sleeper. It is just way too soft for you.

When I was laying on my stomach, I felt like I was sinking in. So if you are a stomach sleeper I would go for a firmer option.

Second, if you’re looking for a memory foam feel, this probably isn’t the mattress for you. Although there is foam inside of it, it’s much more responsive.

If you’re looking for that foam sink in feeling, I’d go for a different option.

And last but not least, the Bear Hybrid might not be the best for couples, unless you’re both really deep sleepers.

When I ran my tests for responsiveness, it was pretty responsive. So if you wake up in the middle of the night to get something, you might wake up your partner, which might lead to them being grumpy and mad at you in the morning. No one wants to deal with that.

Let’s go over some of bear’s company policies when you order the mattress.

It ships free and delivers right to your door in a box. You have a 100 night sleep trial period but you have to test it out for at least 30 nights before returning it.

If you do return it, it’s free to return and if you decide to keep it you have a 20 year warranty.

That’s it for the Bear Hybrid mattress. I hope this review was helpful.